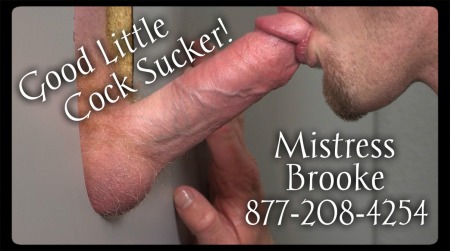 I took him to a gloryhole to learn to suck cock!

If you missed part one, you might want to read that first. He got down on his knees in front of the gloryhole. The look on his face told me he was not too sure of himself but very eager to please me. Not just me though, he wanted to please the cock that passed through the wall as well. My hand was still in the way. My fingers draped through the wall onto the other side to signal that I was ready for a treat.

His eyes widened as the head of a cock slid through the gloryhole. He looked too me for guidance and I nodded my head. Turning back to the hard cock he took it into his hand and began stroking. I told him to show me just how good he could suck it.

He stuck out his tongue and began to lick it up and down as his hand continued stroking.

I told him that if he wanted me to let him start fucking cocks he was going to have to prove to me that he could take care of them first. That was all it took. The dick disappeared into his mouth. He took it so far into his throat that his lips were flush with the gloryhole. What a good little cock sucker!!! I knew he had it in him!

When my smile confirmed my satisfaction he closed his mouth and I could see his throat move up and down as he swallowed it all down.

There were quite a few more cocks to pass through the gloryhole that night. By the time we left my little bitch was not only a good cock sucker but quite the cum slut too! I can’t wait to get him back to test some more of his skills!! I bet he would love to get my approval to turn around and use his ass to please them, but we’ll have to see about that one. Do you think I should let him? Do you have any gloryhole experiences? I’d love to hear about them!! Give me a call and we can share some stories!