Dick Isn’t Just for Me Anymore!! My Little Bitch Sucks Too!! ♕ 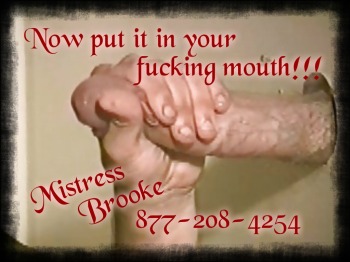 I was going to make my little bitch suck some dick!

I had been fucking his ass with my rubber cock for awhile. He knew it was mine but I was thinking about sharing. He would do anything I told him to so it wasn’t a question of if he would. It was more about how I wanted to start off. I didn’t want to give ass a real dick right away; that would be too easy.  I wanted to make him work for that privilege.

We were driving down the highway when I saw a billboard for an adult store. Mmm YES!!! Our night out was about to get much more interesting! I followed the directions on the many signs along the way and pulled into the parking lot. He looked very confused but did as I said when I told him to not ask questions and just follow me.

I turned to my little bitch and said, “Now, pay close attention because that is exactly what you’re about to be doing as soon as one becomes available!” The look on his face was priceless! It was a mix between shock and excitement. He opened his mouth to say something but quickly closed it knowing that he was not allowed to question me.

Just as his mouth closed we heard a door open in the room next to ours. I smiled and told him to get ready because now the real show was about to begin! I saw his cock stiffen even more in his pants as I put my finger through the hole in the wall to invite the first dick to be sucked by my little bitch! I can’t wait to tell you how he did, but for now, I’ll be watching him and waiting for you to call so I can tell you first hand! Oh, I guess you could wait to read about it…but why wait?!