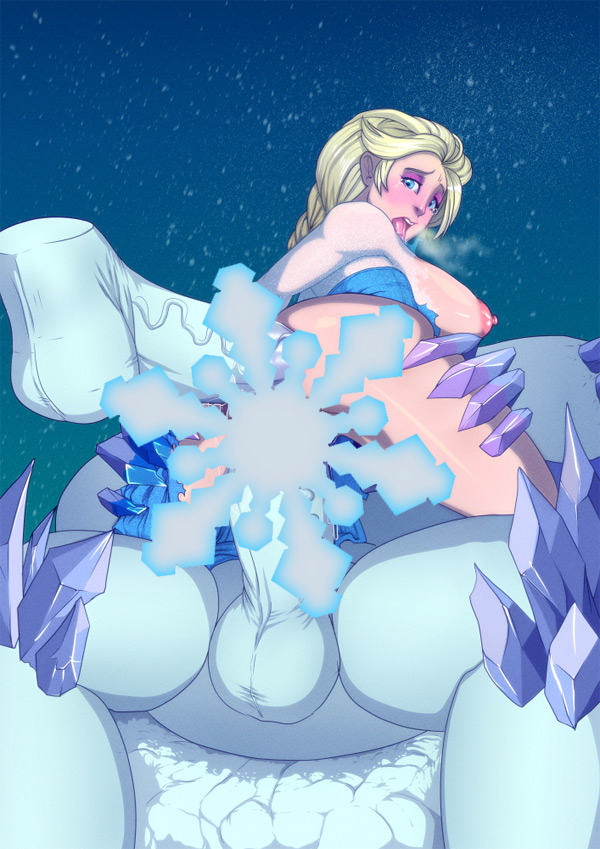 You know the story of Frozen. It has been EVERYWHERE since it came out. But do you know what happened while Elsa was in her ice castle alone? I’ll give you a hint. It has something to do with a giant dick.

Now, if you have seen the movie then you saw how easily she made Marshmallow. But she had made a lot of other ice men before that. She had a lot of practice. I will go back to when she accidentally made her first ice man. Now she had only seen a few naked men from books, she used to masturbate to her books in her room. But she left so quickly that she did not have time to grab her books. The first thing she did after making her ice castle was made herself a friend. Now she fashioned him after the men in her book. But he was made fully out of ice. But what happened was that she let her emotions get the best of her. So she gave this iceman a huge dick. He was unbelievably handsome, fully nude, with a giant hard ice dick.

Now, when she did this she almost destroyed him out of embarrassment. But as she lifted her hand to destroy him he caught it and placed it on his cold rock-hard giant dick. Remember, the cold never bothered her anyway. He started to make her stroke it and she loved it. The way her hand slid across that giant dick felt like glass. He never spoke, just looked at her with his stern eyes and helped her give into her desires. It did not take her long to put that giant dick in her mouth and suck on it. Because his giant dick was so smooth she had not problem getting it all the way down her throat.

He then laid down and she got on top of him, sliding his huge dick into her pussy. Instantly juices started to pour from her pussy. She began to moan and grind on him. Back and forth, back and forth. She started to get so into it that she forgot to control her powers. She threw her hands in the air and started to cum. After she came something fell next to them. It was an ice cock. Not a full man or anything, but a giant dick. The iceman picked it up and shoved it in her ass. She started to moan in pain a little because she had never had anything in her ass before. But as the iceman began to move in and out of her faster and faster, it began to feel even better than before.