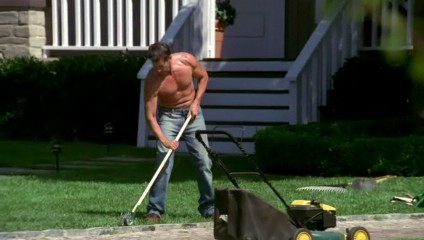 I want to tell everyone about Todd.  Todd is a married man that I am absolutely in love with.  Granted he really has no idea how I feel about him.  Well, maybe he does and just doesn’t want to let on because he is committed to his wife.  Yes, he is one of those good guys.  He is always there for you when you need him to be.  He never asks for anything in return.  He treats his wife like a queen.  Not to mention his gorgeous face.  His beautiful chiselled body, with those hot muscle shirts.  I often fantasize about him snatching me up in those massive arms just holding me while he fucks the shit out of my pussy.   But of course,  it will probably never happen because he is just one of those guys that just happens to  be taken by a wife who is not deserving.

So anyways, she must know that I have the hots for her man.  Because on this particular day she just had to tag along when he came over to do the weekly lawn care.   I kind of thought that maybe he had talked about me to her a little more than usual which could have put her on the defense.   Me being the nice person made some daiquiri’s for her and I to shoot the shit over.  I knew that if I wanted a piece of him I would have to go through her to get a nice taste of that cock. Which sucks because I didn’t find her very attractive at all.

I complimented her well, talked about her nice perky breasts.  I even flat-out told her that I would fuck the shit out of her if I had a penis.  I got nothing. Not one piece of intuition that made me think she would put out and share her husband with me.   After starting to feel very frustrated I thought of an excuse of why I had to get away from her.  I supposedly forgot to tell Todd that I wanted the hedges trimmed this week instead of next week as well as I  wanted him to plant a couple of rose bushes for me.  Wouldn’t mine planting my tulips if you know what I am saying! HAHA

I flirted with him a lot but in a way his wife would not catch on to.    Kind of like an inside flirt so to speak.  Luckily for me his wife had come out only to tell him that she would be back in a few hours.   Apparently she had to go and help someone out.  All I could think is….”There truly is a a God!”  I made myself disappear for a few minutes until she at least pulled out of my drive way.

Wonder if I get to go all the way?  Keep checking back for Part 2!