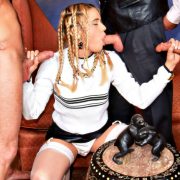 “Mmhmm, look at them, Angel,” Joe hummed in my ear, nodding towards the two naked men. “Can you see how ready they are for you?” I tried not to, but my eyes betrayed me by looking straight at them. Hung like bulls, both stood there proudly as they slowly stroked cocks thick and heavily veined with testicles hanging like stones beneath them.

Joe tightened his grip as I began to struggle again within his strong embrace. “Haha, I guess you like what you see then, hmmm?”

“No!” I snarled in an effort to look brave. “They’re disgusting!” But I couldn’t resist the urge to stare at their hard-muscled, ready male bodies. I realized my mouth was open and I couldn’t seem to catch my breath.

“Now now, Angel. Don’t be saying mean things to my boys,” Joe grinned. “You might hurt their feelings!” Far from being offended, the two men in question chuckled. Unable to look away, I watched as they stroked their hardening manhoods to life. Unwilling to admit that I was secretly impressed, I remained silent for a moment.

I was so unbelievably turned on, even as these men intended to rape me. More than that, they wanted to “breed” me. Furthermore, I couldn’t hide my arousal from them either, not with my moistening pussy on display.

“Let me go right now, you fucking bastards!” I intended to roar, but my words came out in a whimper instead.

The men laughed, and Joe pulled my hands further down my front. “I don’t think we’re gonna be doing that anytime soon,” he said, “we’ll be taking good care of you for awhile, Angel!” Joe let go and pushed her forward into the two burly men. I yelped as they resumed their rough fondling, kneading my tits and running their palms along my bald pussy, their cocks hardening against either side of me.

“Ohhhh fuckkkk,” I moaned. Squirming in the men’s grip, I found that I had closed my eyes again under the pleasurable assault. Their hands pinched and rubbed my naked body, unafraid to squeeze or pet my most intimate places. Indeed, I could feel their desire in the way their cocks hardened against me, creeping up along my hips like hungry snakes.

I kept struggling, but it was a losing battle in my own mind. “Why am I enjoying this??” I thought frantically as a terrible excitement grew in my chest and between my thighs. My body seemed to answer in turn:

“You want this, Angel. You need this. A good, hard fucking from these strong men…”

Although I tried to fight it, I felt my juices flowing and my nipples grazing their ever-petting hands. When I forced myself to open my eyes, I saw Joe tossing his shirt aside. I really stared then.

“I guess you like what you see, huh?” Joe chuckled as I stood there, awestruck. I saw his bare chest, developed from more than just lifting beds and tables for a living. His muscles flexed with every smooth motion of his arms. Strength radiated from his perfect form, and his look towards me was one of pure desire – a prized catch – a toy to be enjoyed.

“Yes…” I breathed, my mind quiet for a moment.

“Ha! That the first straight answer you’ve given so far,” Joe laughed. The men holding me joined in as well, and deep laughs that made me feel so small, and so much more like a plaything for them. I breathed even harder as he continued, “And you haven’t seen everything yet, Angel…”

I thought he’d merely tear off his workman’s jeans with those powerful arms, but he slowly unzipped them, making me squirm with anticipation despite my best efforts to resist.

“You’ve seen naked men before! Don’t lose your head, Angel!” But my thoughts were muddled by the rubbing of my clit, the hot breath gusting against my neck, and the gnawing need growing in the pit of my belly. Obviously, I’d seen men before, “But not men like this…”

Unbuttoning his jeans and stripped himself in a single motion, Joe stood tall in front of me with a smirk on his face. “Look, boys, I think Angel has seen something she really likes!”

He was right; my heart nearly stopped at the sight of his manhood. The man was perfectly hung, very hung. Joe’s veined shaft hung low between his legs, testicles hanging lower at the base of his shaft, heavy from the weight of their no doubt huge load.

The other’s cocks were stockier and fatter, while his was longer and still thick. Joe outstripped his workmates by far with his symmetry and glory. While theirs were the cocks of bulls, HE was a stallion.

I felt hot – hot from the men grinding their hardening members against me, hot from Joe’s wolfish gaze over my body, and hot from the burning desire that made my pussy drip down my inner thighs. I stopped struggling. My knees felt weak and ready to give out at any moment. I couldn’t help myself as my resistance began to fail.

“Mmm, I think Angel wants a taste of us, guys.” Joe grinned. I didn’t move, even though a small part of me wanted to nod my head in agreement. Conversely, more of me wanted to scream in protest.

Joe ran his hand along the length of his huge cock as he looked into my frightened blue eyes. “Time to get on your knees, Angel.”