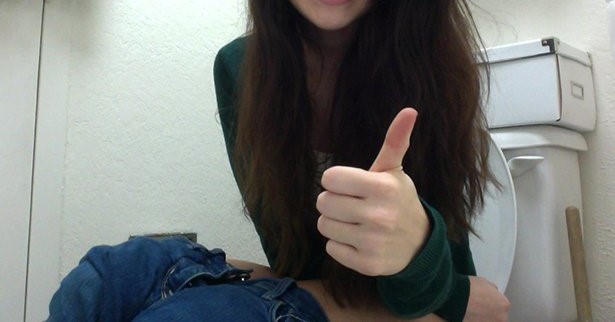 Free Sex Story: Golden Showers For My Kinky Friends! Sometimes I’m a very bad girl and I make boys do things that make them feel ashamed. I don’t always mean to do it; sometimes an opportunity comes up and I just have to go for it. My sort of boyfriend Keith invited me to hang out with him and his friends the other night and there was plenty of beer going around. After we watched a movie one of his friends suggested playing poker which I’m not the best at.

The guys gathered around on the floor, clearing the coffee table so they could play on it and Keith knocked back the rest of his beer. He skipped this game and we watched his friends play, both of us trying to guess who was bluffing. Keith started shifting around and I asked him if he was okay. He said he was but it didn’t stop him from moving around. It took a few minutes before I figured it out; he had to take a piss but was too much of a man to say he needed to go to the bathroom.

I just had to see how far I could push him and said “Quit moving, it’s so annoying. Just sit still like an adult.” I leaned against him, pretending to snuggle up to him and put my arm around his waist. I knew it was pressing into his bladder and he groaned as I reached across him to grab a couple of beers off the plastic rings. I gave one to him and when he didn’t drink it I got everyone’s attention by loudly joking “Are you seriously turning down a drink? Wow, are you sick or something?” He blushed and took a sip, trying to act like everything was normal.

I kept myself tightly against him, not letting him move. He was breathing harder and after a few minutes, he started to get up. “Where are you going? The game’s nearly done.” I told him and one of his friends said: “Yeah, stay and watch me beat these guys.” Keith sat back down but his fidgeting got worse and I had to keep telling him to stop goofing around. His friends were looking at him more now, realizing something was going on and it was putting him on edge.

What Do You Think Of Your Free Sex Story?

His face was getting redder and he shoved a hand into his pocket. He could try to be discreet all he wanted; I knew he was squeezing his dick and hoping he wouldn’t piss himself. I held my beer just above my mouth and slowly tipped it, letting it spill into my mouth in a long, slow stream. He couldn’t take the teasing and I had to try so hard to keep a straight face. “Shit,” he said and shoved me out-of-the-way as he stood up. He shoved his hands between his legs, groaned then tried to move. We looked at him as he took two steps then froze, his mouth hanging open as he began to piss himself.

It dribbled over his fingers and his trousers got darker, as piss poured out of him. One of the guys chuckled but the others just sat there staring. They weren’t expecting him to do this at all but I’m glad he did because the humiliation on his face was amazing. I just had to laugh as I saw him standing there piss stained trousers while everyone looked him like he was a giant loser. I’d had my fun with him and there was no way I was going to fuck him after that. I only fuck real men, not little boys who go around pissing themselves in public. I am full of free sex stories, just ask about them and I will gladly share the juicy details!