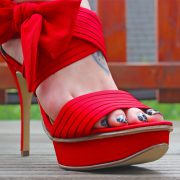 I have the best roleplay partner for forced sex phonesex.

My caller, M, never fails to get me excited about his forced sex scenarios. I always start our roleplay by storming into his place, swinging open the door. My heels click on his floor, and my sundress, with nothing underneath, flares as I slam the door shut. I demand to know why such a perv looks and jacks off to my online photos. M whines a bit, blabbers something as an excuse, so I hit him over the face.

“You pathetic little bitch,” I tell him. “I’ll really give you something to cry about.” I spit in his face and shove him to the ground.

“Why don’t you get a better look at the pussy you’ve been lusting after?” I ask, and I squat over his face. He’s still babbling, so I grip his chin in my hands and make his head stay still as I piss all over his face. I take a shit on it, too, for good measure.

That’s all the disgusting pig of a pervert called M deserves.

I love forced sex with M; call me so I can have humiliation phone sex with you, too!