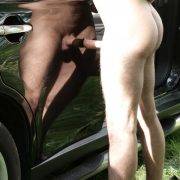 Lesson to be Learned: Don’t Touch Me When I’m Angry

I let him start to rub me through my thin lace panties. A smile grows on his face as I lean into his hand and start to moan out his name. No part of him suspects that his girlfriend has such humiliating plans for him. Then, I leaned over the center console and started to kiss on his neck. My tongue flicked the bottom of his ears and my hands started to rub up his thighs. Then, I whispered into his ear, “Baby, pull over. I want to get in the back seat and have crazy hot car sex right now!”

When he climbs on top of me, I curl my toes around the door handle behind him. He holds his cock tight as he pushes my legs apart to guide it inside of me. To be even more of a bitchy blonde girlfriend, I let him just barely pop the head of his cock inside. Just as he is about to push further, my toes open the car door and I push my naked boyfriend out! Quickly, I pull the door shut, reach into the front, and lock him out. Then, I crawl into the driver’s seat where I put on my panties and crack the window to fill my boyfriend in on his forced public masturbation.

He now understands that I am not lying and starts to jack off very aggressively. I sit back in my seat and laugh as I watch the time tick by and my boyfriend desperately tries to shoot his load. It comes down to the final 30 seconds and I warn him that his time is coming close. As we get down to 10, I begin to count.