Forced Nonconsensual Cuckolding- a Bad Girlfriend for a Bad Boyfriend 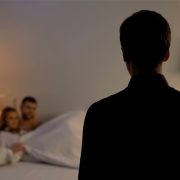 As I realized T didn’t even engage in foreplay, I made up my mind to give him some forced nonconsensual cuckolding. He pressed his cock inside my body, grunting. Though he sought his own pleasure, he never checked in with me to see if I felt good.

Despite my complaining, there was no foreplay, no playing with my beautiful breasts, and even no kissing. Before our sex, I slid on panties and wore nipple tassels.  My legs spread on the bed as invitingly as I could manage.

Rather than play, T went ahead and crawled between them and moved my panties to the side. I think he was so focused, but his only action was to thrust inside me. Consequently, it was the worst sex of the week, if not my life.

Despite him panting “You’re gorgeous, you’re beautiful” again and again in my ear, the lack of foreplay didn’t make me feel beautiful. Nor did his lack of prep. He muttered that I was too dry, and not wet enough. Of course, this caused me to see red, and immediately I went to forced nonconsensual cuckolding scenarios.

T didn’t even give me a warning about coming inside me. Luckily, I’d known him well enough to see the signs– body tensing up, heavy breathing, and I pushed him away with my foot. He snarled and then asked why he couldn’t come inside me. “I’m your boyfriend,” he whined.

T had the audacity to shrug. He shrugged. “You should work on that.”

And like that, the forced nonconsensual cuckolding plan was a go.

I talked to my friend G, one of my previous fuck-buddies. He agreed to help me out and to worship and pamper me in the bedroom. The goal was as many orgasms as possible. Which, in all honesty, was something he and I often did together. When I explained my plan in our local coffee shop, he raised an eyebrow.

“No, no. I’m giving you a strip tease seduction with lots of foreplay. Then, I’m going to talk about how great you are.” After I spoke, I gave him a wink and sipped on my coffee.

So that’s how we pulled off this forced nonconsensual cuckolding.

It was easy to lock T in the bedroom closet. I put the chair there, and let him know I was tired of his selfish love. I let him know a real man was coming to fuck me tonight, and that I’d be getting all the orgasms I deserved.

And thus, when G walked in the room, I gave him my strip tease. T could only see through the slats, and I heard him rattling against the closet door.

“You look hella sexy, baby,” G let me know, letting his hands slide down me. As my bra came off, he pulled me up to suck on my nipples. Despite sucking, G kept me upright above him with my ass pointed at the closet. And as we discussed, he slid off my skirt and my panties.

“I haven’t been this wet in months,” I moaned. In response, G took a few fingers and slid them inside, letting T know exactly what I needed.

Giving It to Me

Clearly, I came over G’s fingers. We both made a show of it. However, I confess I didn’t have to try hard. After weeks no attention, my hips moved of their own accord. “I love being fingered, fuck.” Evidently, my body proved that with trembling limbs.

“I know. Personally, I think your man doesn’t know how to please you.”

In response, I kissed G hard, pinning him to the bed. “But a real man does,” I countered. In order to show that I meant it, I opened my ass cheeks. Consequently, I gave T a show of how wet I was.

“Another orgasm, please,” I begged. “I don’t get enough.” As an answer, G laughed and kissed me senseless Next, his cock lined up with my hole. “Yes, please. Oh, fuck.”

“Yeah? Feels so much better when you’re wet, right? Of course, it does.”

“Fuck,” I breathed. “I can feel you… fuck.” With his cock inside, I could hardly think. “So much better when someone knows what they’re doing.”

G laughed again, a deep rumble that seeped through my bones, from my head to my toes. He flipped me over. “Don’t you worry, baby. I’ll give you all the orgasms you need.”

Unsurprisingly, G did. And after that night,  T never gave me any orgasms. Because I never let him touch my pussy again.