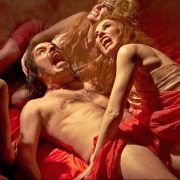 You never know what will happen when you experience Forbidden, Seductive, Vampire Love. Meeting Shawn was a freak thing. I’d just left “Bar One” downtown when the air, the atmosphere itself began to change.  It was subtle, at first, then it shifted. The air was frigid, which for me is always welcum. But, this time it went from warm and humid, to positively bone-chilling.

At first, I didn’t hear a thing, then, I sensed him. He closed in on me like a wind. A warm, seductive wind that enveloped me like a cloak and I welcomed it. His fingers climbed my back and over my should, then he stood before me.

“Shawn…” My voice trailed off like a cartoon bubble. How could I know this man’s name? I’d never seen his face before, but there was a connection indeed.

“There is no need to fear me, Mademoiselle, Josette.”

He knew my name and yet, no fear arose within me. I strained to speak, then it came. “Who…who are you, Sir? He was as still as stone, but I discerned a small sound; was it his heartbeat? No. It was far too slow to be that, what then? Another sound of a low gurgling started and when my eyes shifted back to his face, I saw what appeared to be a slight flicker his eyes. Human, but something frightening beneath the surface.

First of all, before you get all judgey, I’m no stranger to the one-night-stand, okay? Furthermore, I’ve got some experience with Public Sex too. So, I think I’m pretty street savvy. But, was I prepared for a huge dick attached to the UN-DEAD? Hmmm. We’d find out.

“Josette, I wish to have you, but I cannot bring myself to “take” you.  Do you understand?”

I froze. The last time I’d heard words spoken that way was in an old vampire movie. I smirked at the thought without realizing I’d done it.

He spoke again, “You think I am a joke?” There was a low animalistic growl underneath the words.

“Oh, no! Not at ALL! Forgive me. It was a silly thought that crossed my mind about vampires and the like. Haha.”  He simply gazed at me.

Breaking an awkward silence is difficult.

Finally, he smiled at me and leaned in for another kiss. He took my hand and said he’d love to show me his etchings. I giggled again. He spoke in a way that was old world and I found it très charment. We arrived at his flat and as he glided through the door as if on air. He turned and looked at me as I began to enter; his hand actually halting me mid-stride.

“Please. Enter freely and of your own accord…” There was the growl again and my pussy clenched and the wetness began to flow. I laughed out loud this time and told him he spoke like Bela Lugosi. He stared at me this time and said, “Would that be so inconceivable, Joey?” He even knew my nickname? Huh!

He kissed me again and I knew that as crazy as it would seem I wanted to be with him. In the Biblical sense!

I was standing still as if my mere movement might spur an attack.

“Yes, Josette. I am a vampire. I have searched for you for a millennium, my love.”

I didn’t want to believe him, but I was having carnal flashes in my brain perhaps to a time long ago. I saw us fucking, licking and sucking; making love in every way. I saw him buried deep in my ass and down my throat. I saw and felt him plowing my pussy like a field!  That’s when he spoke his name for the first time. My ears rang with this new knowledge and my heartbeat quickened.

I spoke it and he gently pinned me to the wall, lifting me from my feet in one mesmerizing scoop. His rock hard cock slid effortlessly into my ass and it felt so good I didn’t bother to tell him he was in the wrong hole. lol

Next came the sacrifice to Forbidden, Seductive, Vampire Love.

Out of my ass and into my pussy he went and the pleasures were more than I’d ever felt.  He later told me that in his world he was moving in slow motion, but for me, he was jack-hammering that pussy! We both flooded the hardwood floors with the mix of our lovemaking. Our bond was sealed when he slid down my body and between my pussy lips swirling and twirling his lips and tongue so that I’d want no other.

Is it really so wrong to crave Forbidden, Seductive, Vampire Love?

The next days are a blur of lovemaking on a level I’ve never know and can no longer live without. I also know that I’ll be left alone for long periods of time as he handles counsel business. I’d learn to live without his touch, but I’ll never like it!

After all, it begins and ends with absence and denial.

Do you think I still feed my need for Forbidden, Seductive, Vampire Love? Call me and see. LOL.