FOOT FETISH STORIES AND HOW I FOUND OUT ABOUT HIS!

FOOT FETISH STORIES AND HOW I FOUND OUT ABOUT HIS!

Most foot fetish stories are an eXXXciting thrill for BOTH parties.  And you get to really know your significant other.  But, sometimes you think you know someone.  But, there’s no telling how much you DON’T know….’til you know! LOL.  With that in mind, I had a niggling at the back of my brain saying something was a bit “off” about my new man.  It’s amazing what good fucking will help you look past those pesky, little things, huh?

Now, don’t get me wrong when I say we’ve had play dates from the very start of our infatuation, and we’ve been kinky as fuck during our sessions.  Furthermore, the things we shared ran the gamut and included all sorts of fetishes, some I hadn’t even heard of.  But, when you’re that free with a lover and then find out there’s more?  Oh, shit yeah, you wonder just how bad it could be!

Moreover, I began to spy a little into his drawers, closet, briefcase.  Not that I’m a nosy girl, just uber curious.  And what I found only made me wonder more.  And the more I wondered, the more I searched, but there was nothing to find.  One would think that a new kink would leave its telltale marks, right?  Not so much.

When I tell you NOTHING gave a hint as to FEET being his new thing, nothing gave a hint!  So, I was totally unprepared for what happened one night after partying our asses off.  I was half awakened by a warm, wet, slick sensation on my feet, and being a dog owner, I guess I just ASSumed it was him trying to wake me for our morning run.

I moaned and attempted to roll onto my back, but something prevented it; and as a sleep-deprived woman, I simply moaned and tried to roll back.  Again, I was foiled.  Now, even in my slumber, I was getting annoyed.  Furthermore, the warm wetness persisted.  I moaned again and slowly opened my eyes.  ANd when I tell you my man with my high heels and sneakers piled neatly at the foot of the bed as he used my soles to jerk himself off, was NOT what I planned on seeing.

We talked about it as I got him off (finding my pussy more than a little slick from the experience) and I found that he had been sniffing and licking the soles of my sneaks and heels for a while now.  Ya think you know  someone!  Nevertheless, he’s proven to be a keeper.  Of course, I make him brush before kissing me.  I’m a clean girl, but I don’t want to taste my own feet.  I’ve got NOTHING AGAINST his fetish… it’s just not MINE. But, I’ll give him all he can handle with these pretty, little ballerina’s feet!

Wanna have an Adult Chat about the fetishes that turn YOU on?  I’m here and waiting for you.  So, if that isn’t your kink…tell me which one it is.  One of my Faves is Fetish Sex Stories. More than likely, I’ll be down for everything that brings YOU…UP!  Im Just Joey and I’m ALL you’ll EVER NEED! 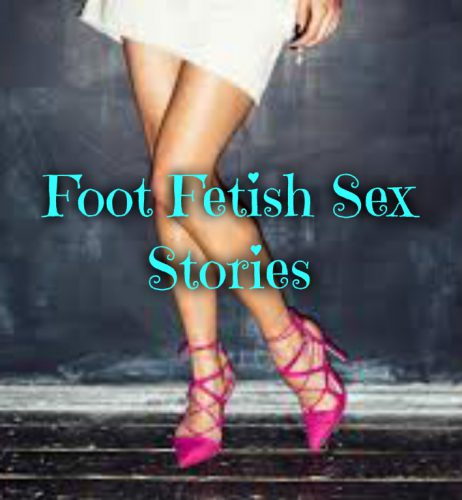 One Reply to “FOOT FETISH STORIES AND HOW I FOUND OUT ABOUT HIS!”