Food Fetish? Enjoy This Series Of Fantasy Sex Stories-Part I* 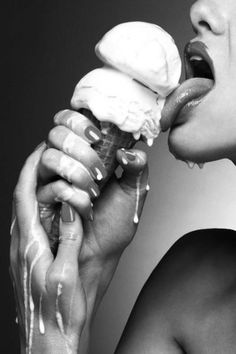 Food Fetish? Enjoy This Series Of Fantasy Sex Stories-Part I

Food Fetish? Enjoy this series of fantasy sex stories. Veronica paused as she saw her reflection in a store window. Her hair was done up, and she wore a pretty cream and rose dress that was part of her uniform from the old-fashioned ice cream shop where she worked. She smiled! Then, she continued up the steps to her apartment. As she stopped to unlock the door, the plastic bag holding a pint of ice cream swung from her wrist and hit her leg, announcing her arrival.

Timothy stood up and smiled as she entered, pulling his long hair into a ponytail. His eyes were riveted on the fancy script of the bag. She didn’t mind; just looking at Jake made her clit pulse. People might look at the pair of them in surprise, what with him looking like all he was missing was his Harley. Dressed all in black, as usual, with his flowing black hair, she was struck as usual by his beauty.

Fantasy Sex Stories Are My Favorite!

People saw him as a rough biker. Of course, she saw him as the sweet, sensitive lover he was, as her baby with the sweet tooth. He kissed her temple, and taking her wrist, asked her like he did every time she came back from the ice cream shop. ‘What kind of ice cream did you bring?’ Veronica smiled, as she opened the bag. Timothy loved desserts, and he loved the unusual savory ice creams they made at the store more than anything.

‘Red pepper ice cream,’ she smiled, handing him the bag. Then, Timothy grabbed the bag from her, and she went into the kitchen to place the takeout that she bought on the counter. Next, from behind, even before he touched her, she felt his heat. By the time he touched her backside, she was infused with him. His scent and the heat of his skin through her clothes.

She leaned back into him and felt the coolness of the ice cream, just beneath her uniform. ‘Decadent,’ he murmured into her hair. Veronica nodded, as he kissed her neck and took her hair out of its neat chignon. Her hair tumbled to the middle of her back, and soon was the only thing that covered her. Then, she pushed her hair to the side, as Timothy placed a scoop of ice cream on the small of her back… To Be Continued! Tell me some of your favorite fetishes!