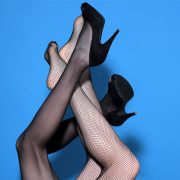 Planes now are pretty empty. But for travelers like me, always looking for a quick hook-up, this presents itself as an opportunity. I’m not a stranger to the mile-high club, but when tensions are high and people are wary, everyone’s looking to let off some steam. And I, giver that I am, love to help others let off steam.

There was a combination of factors in my flight that lead to this- the flight attendant in the back seemed tired, frustrated, and sat in a seat next to my row. She and I spoke a little before the flight, both of us in mascara. “I wish I could use lipstick,” she complained to me. “Makes me feel a little more beautiful.”

“I don’t think you have anything to worry about,” I assured her and gave her a quick check-out. She laughed at my half-joke, her neck betraying her blush. Interest.

Interest I could use. As we buckled in, she announced herself as Carly and began the safety demonstration. During this, I pointedly checked out her uniform: tights, heels, a skirt. While her coworkers went with slacks, Carly seemed a lady who needed to be validated.

And I aimed to do just that.

A Little Bit of Teasing

Since there were no drinks or snacks served, she and I continued to chat. “It just sucks,” I told her. “I can’t even find a partner to get off to, you know? I mean, even a guy at a bar will do when I need a hand.”

Carly nodded. “Fuck, even a foot would do,” she replied. “Just to know that I’m not ignored, that it’s not me.” That gave me an idea.

And her statement was the opening I needed. “Even a foot, huh?” I teased. I took my foot out of my shoe, rubbing it against her ankle. Carly laughed a crystal sound that rang out over the hum of the plane engine. In short, I was in the clear.

In response, Carly took her heeled foot and pressed it over my thigh. “You wanna give me some pampered feet worship?” She asked, and I went ahead and took her foot into my lap, removing her heel.

“Anything to help a working lady feel appreciated,” I flirted back. To prove my point, I began rubbing the soles of her feet.

She gave a moan. Instantly, embarrassment forced her to search if anyone had heard hear. But no one noticed. So, I pressed my thumb deeper into her feet. My lover shivered, her hands moving to her skirt. Flight attendant sex was a go.

“Seriously, enjoy yourself, Carly,” I encouraged her. To make sure she understood, I gave her a wink.

As I massaged her foot, Carly’s hand moved up her skirt and into cute pink panties. Her eyes closed and she moaned again. Admittedly, this time, I noticed more than the sounds she made. To clarify, her pussy began to smell that sweet musk of a lady being pleased. It smells good when you have a pussy dripping.

While I watched Carly stroke her clit, I continued my ministrations on her feet. Her breasts heaved as she grew closer to orgasm. As she did so, I continued pulling on her toes, pushing and prodding, stroking where she seemed to react best. Suddenly, her body jerked, and her hand moved to cover her mouth. Simultaneously, the wet spot in her panties grew, soaking the whole underside.

In a moment, she sat upright. “Thank you,” she half-panted. “I cannot begin to tell you how much I needed that.”

“More flight attendant sex?” I joked. In response, she patted my shoulder.

However, I did manage to snag her hotel number as I deboarded the plane.

Want to get your own flight attendant sex on through roleplay? Let me tell you more about this– through fetish phone sex!