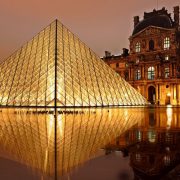 The first squirt fest with a married man was so amazing. I had to do it again…

After my first squirt fest with my hot married man from the bookstore, I began to wonder if he would call. I kept thinking about our steamy sex affair. He took my number but wouldn’t give me his or tell me his last name. I only knew his first name was Matthew.

Three boxes were waiting for me. One box contained a gorgeous black dress from Neiman Marcus, another contained a beautiful set of dark blue panties from La Perla, and the third, a magnificent pair of black shoes with red soles. He left a note: be dressed and ready by 6:30 PM.

I took a hot bubble bath and slowly shaved by pussy, legs, underarms, and ass for flawlessly smooth skin. Then, I rubbed the most luxurious pineapple scented lotion all over, including my freshly pierced breasts. Then I curled my hair and did my makeup.

A black stretch limo waited for me.

I walked out, and a tall, dark driver opened the rear door for me. Before I got in, he slipped a silk blindfold over my eyes.

I sat in silence and darkness for what seemed like an eternity. Eventually, we came to a stop and the door opened. The driver helped me out of the car and guided me up a set of steps. It was cold out, I felt my nipples hardened as I climbed the steps.

It didn’t take me long to figure out I was getting on to a plane. Once on the plane, someone unzipped my dress, it fell to the floor. Someone gently lowered me onto a soft bed. Then someone tied my hands so that they could not move. Someone else slipped off my heels and elevated my legs into a set of stirrups. This was getting hotter than our first squirt fest.

The blade grazed my thighs and my hips until my panties fell away.

I’ve done many kinky things before, but I’d never experimented with knife play, much less while blindfolded.

Oddly enough, I felt no fear. As the blood trickled onto the mattress, I felt a thick, veiny cock enter my mouth. While the cock went in and out of my mouth, I felt the knife graze over my nipples. They were already sore from the piercing, and the gentle flow of blood made those inflamed nipples sting even more.

That thick cock moved faster and faster until I felt a dense mass of pubic hair rub against my nose. My pussy was getting wetter and wetter. My clit was throbbing and begging for a man’s touch. A hand traveled down my stomach, and I thought I would finally feel probing and gentle fingers. Instead, I felt the blade of that knife grazing over my clit.

Then, I hear the landing gear lower and feel the plane descend. Once it landed, I was unrestrained and helped to my feet. Someone helped me put on a silk robe.

Still blindfolded and with help, I came down the stairs of the plane and put into another car. I was so tired from the bleeding and the high from being teased so erotically, I fell asleep. When I woke up, I was in a bed in one of the most elegant hotels in Paris, and that is where the fucking began.

Want to have fun in the Phone Sex Kingdom? Call me!