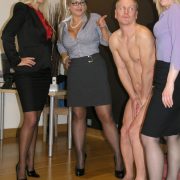 You’ve been craving this, your first public humiliation by not one, but TWO sexy Mistresses.

First public humiliation: A chilly February breeze blew over me as I stood on the sidewalk, waiting patiently for Mistress Angel and her girlfriend to arrive. While I was excited, I was also more nervous about this session than I had ever been for any other. Today would be the day that I would finally be humiliated in public for the first time.

After a few minutes, I spotted the two hot young college girls on the sidewalk across the street from me. There was Mistress Angel, with her petite athletic build, blue eyes, and silky, long blonde hair. Just as alluring, her friend Mariana sported auburn braids, green eyes, and an equally tiny build. Would this be a “good cop bad cop” sort of situation? I suspected that I was about to find out!

I shook Mariana’s hand and introduced myself, since I’d never met her. The ladies told me they were excited to share this fun, new experience together.

I smiled nervously in response. So, my first public humiliation is really about to happen.

The location the ladies chose for my public debasement turned out to be a nearby campus bar. They led me inside and up a small flight of stairs to the second floor, where they chose a booth that was right in the middle of the room, directly in front of the bar. Although it was only Thursday night, people were everywhere. It turned out the bar had special discounts on Thursdays, so there tended to be a full house.

I had really hoped that we would get a seat in the corner somewhere, but of course, that wasn’t my decision. Angel and Mariana sent me up to the bar to order drinks for each of us along with an order of french fries. I did so, then returned to my seat between the two of them. They had both removed their shoes and immediately placed their socked feet in my lap.

I began rubbing their feet, as they obviously expected. As I used both hands slowly and delicately on Angel’s feet, I became aware of Mariana’s foot making its way towards my face.

Obediently I opened my mouth and allowed her toes inside.

The style of this particular drinking establishment was very youthful and edgy, with each wall covered in graffiti art pieces. I mention this because, on the wall above our seat, there was a graffiti piece of a beautiful woman in a red dress. As I rubbed her feet, Angel gestured towards her and asked, “do you think she’s pretty?”

“Why don’t you give her a kiss, then?” Angel managed to command sternly while she and Mariana stifled their giggles. And so I stood up in the booth, turned around, and planted my lips against the painted lips on the wall.

I’m sure several people saw me, but I was too shy to really look around the room. This was my first public humiliation and my face was on fire! As I sat back down, Angel and Mariana were laughing their heads off. They immediately put their feet back on my lap and in my face, and I continued with the foot rubs.

At this point, our waiter arrived with our drinks. Both girls picked up their glasses and began sipping from them. I reached for my glass.

“Wait,” said Angel. She took my glass off the table, brought it up to her face, and slowly drooled into it.

Mariana laughed, then took the glass from Angel and did likewise. Mariana then held my glass in front of my face, pointing the straw at my mouth. Obediently I took a sip.

It was at this moment that I first made eye contact with a young woman seated at the bar in front of us. Most of the patrons were facing away from us, towards the bar, but she was facing us and just staring at me. I had just enough nerve to return her gaze for a few seconds. She was not smiling; on the contrary, she looked disgusted. Embarrassed, I turned away.

When our french fries came, the intensity was turned up, and heads definitely started turning our way. Angel and Mariana were relentless. They threw a couple on the floor, demanding that I get down on all fours and eat them.

As my face burned in delicious humiliation, I obeyed their every command.

Angel dunked another french fry in my water glass, along with some of the ketchup. Last but not least, both ladies graced my drink with more of their saliva. Angel even started chewing on a fry, then took the half-masticated thing out of her mouth and forced me to eat it while saying “Mmmm!”

They rubbed more chewed-up food and spittle across my face, warning me not to wipe it off.

Like a good boy, I continued rubbing their feet and occasionally kissing their toes as I noticed more and more people watching us. As our meal wrapped up and we prepared to leave, Angel sent me to the bar to pay our tab. A young woman whom I had not seen before approached us.

“Excuse me,” she said. She glanced at me disparagingly. “I’m not talking to you, because you’re…nasty and gross. But…” and she turned to my mistresses to ask them something. Considering myself dismissed, I walked away and meekly requested the tab. The bartender didn’t say a word, just turned away and drew it up.

I paid and returned to the table. The young woman was still there, and Angel told me that she had requested a picture of us. So I looked at this stranger’s camera and smiled as my Mistress Angel sat on my lap, using my face as her napkin, while Mistress Mariana stood on the seat and stuck her ass in my face.

As we finally left the bar, Angel told me, “That girl told me she’s a journalist for our college newspaper. Maybe you’ll be famous, subby fucktoy!”

What happened next? Experience the best phone sex with ZERO limits. Call my phone sex hotline to play NOW!