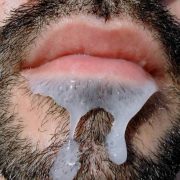 “But I JUST came inside of you! It’s still hot!” He whined.

Later that night, Jeremy and I were at the club having some drinks with our friends. When my song came on, I ran out to the dance floor. Jeremy has never been much of a dancer but I love to bump and grind when the right music is on. A man noticed me and came over to dance. I knew that Jeremy wouldn’t have much to say since he won’t dance and he’s not one for confrontation.

Setting Up A MFM Threeway

I brought my dancing man over to Jeremy and introduced the two of them. All of our friends had taken off while I was out on the floor, so I invited my new man friend over to our house for some drinks and more dancing. Jeremy never tells me no so we all piled in his truck and Jeremy drove us home. When we got home, I sent Jeremy into the kitchen to pour us all some drinks. When he came out, my arms were wrapped around the stranger’s neck and we were dirty dancing in the living room. Jeremy sat down on the couch and quietly watched. Jeremy and I had locked eyes and he could tell that I was up to something mischievous. That’s when I leaned in and gave the man a deep kiss.

“WOAH! What the fuck are you doing?” Jeremy had never raised his voice like this before and it almost startled me. However, I know how to ease him back down.

“Baby, our new friend here agreed to come over for a three-way tonight! Isn’t that exciting?”

“Are you kidding me? I didn’t know anything about this?”

“I hinted at it earlier and you didn’t say no. Don’t you remember me mentioning bringing a man home that can please me tonight?”

Embarrassed, Jeremy couldn’t choke out an argument. I could tell that a lot of thoughts were running through his mind and he knew that he would either have to submit or we would break up. So, I continued to kiss the man in front of him as he began to undress me. Jeremy watched as a stranger stripped down his girlfriend to her panties and lifted her up around his waist. I reached below me and pulled the man’s zipper down. A massive bulge peeked out and then a full cock escaped his boxers.

“Look how big he is, babe! Have you ever seen a cock that big before???”

As Jeremy’s zipper was sliding down, he suddenly remembered his panties and cock cage. But it was too late. He was fully exposed and standing very close to the other man.

“Dude, what are you wearing?” The man laughed at Jeremy and I giggled along with him.

“Oh, those are his panties! He wears them every day.”

“And the other thing?”

“That would be his cage. Do you like it?”

I bet I could get Jeremy to suck cock next time. Or maybe I’ll just go find me a real man! Should I stay or should I go?

Call my phone sex hotline now with your answer!