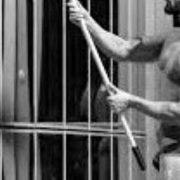 Filthy Friday Frolicking Was The Last Thing On My Mind…

In England, our window cleaners do their rounds usually once a week or fortnightly. They tend to have a bit of a reputation – and not for nothing! One man, his bucket, and a ladder – it’s a common sight in the suburbs. Sometimes old and cranky, sometimes a sexy stud – I suppose it’s the luck of the draw as to which one you get. For some reason, I was soon to discover, ladies seem eager to see them. Let’s just say, I never realised filthy Friday frolicking could be so much fun!

After Uni I was living just outside central London, in suburbia. I had my first job in a multinational company and all was going exceedingly well. Unfortunately, those City firms work hard but party even harder and one Thursday night I had rather a little too much to drink at the pub after work. Waking up Friday morning with a killer of a hangover, I had to take the morning off, of course.

After phoning into work, I managed to drag myself out of bed, brush my teeth, and make a nice strong cup of tea. Feeling somewhat delicate, after opening the curtains and the window to let in a bit of air, I crawled back into bed and of course, dozed off again.

A little later I was woken by the sound of cheery whistling. I was obviously hardly in the mood. What the heck!

As I opened my eyes, right in front of me on a ladder, shirtless in a pair of jeans was the sexiest window cleaner I have ever seen! Was I having one of my devilishly dirty dreams? Oh, I remember him now! He wasn’t a complete stranger as I had seen him doing his rounds and thought he looked hot but that was about it. However, seeing his manly muscles now….

“Ello darlin’,” he said. “You don’t look so sharp! ‘Ow about I come in and give you something to smile about?” His brusque East End accent and his sexy body were starting to stir me. I had always had a ‘thing’ for a bit of rough. But I quickly came to my senses! If he thought a bit of filthy Friday frolicking was on the agenda this morning, he could obviously think again!

I let out a shriek and pulled the duvet cover over my head, embarrassed at the state of what I must look like. And despite how hot he was, sex was the last thing on my mind. I could hear him laughing and was so annoyed that I forgot I was as naked as the day as I was born and walked over to the window, promptly closing the curtains! “Piss off, you bloody idiot”, I told him.

There! That will show him. How dare he?! Only it didn’t show him! Well, actually it did – my fully naked hot young body! As I was about to climb back into bed I heard shuffling and turning towards the window, there stood Mr. Window Cleaner. Let me re-phrase that – Mr. Amazingly Handsome And Very Fuckable Window Cleaner!

Frenzied Fucking Is The Best Hangover Cure Ever!

I felt like we were standing frozen in time for what seemed like an eternity. And then mayhem… We literally could not keep our hands off each other. I helped him undress and as he stepped out of his boxers his rock hard 8-inch cock almost hit me in the eye. He picked me up and we kissed as he pressed me against my bedroom wall as we fucked like rabbits.

I’m sure moans of pleasure could be heard for miles. And I know the neighbour opposite saw our sexy shenanigans and enjoyed our filthy Friday frolicking just as much as we did!

Did I care? Not in the slightest. This was the best hangover cure ever! Filthy Friday frolicking at its finest!

Call your favourite English girl for the best phone sex ever!