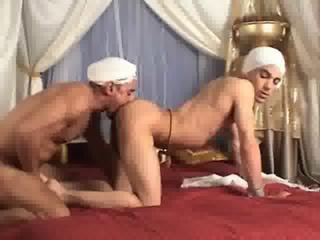 The Third Day of XXX-Mas

Fantasy sex stories for XXX-Mas Continue to day three, and oh what a day it was.

So, I was not happy when riding back to the workshop I was stopped by one of the three wise men.  Apparently, the winter storm blocked the North Star, and they had no idea which direction to go.

As a result, they were camped in the forest outside of the story factory.  Because I could not just leave them lost I grabbed a map and followed him into the big tent.

And what a sight I saw.

The second wise man had his 10-inch cock shoved up the ass of the third wise man.  He was also humiliating him by mocking his 3-inch cock and calling him a fucking sissy.   Apparently, they had found a way to pass the time.

Never one to miss an opportunity, I wanted to join in.  So when the first wise man asked if I wanted to play, I stripped on the spot.

Then, kneeling right there I pulled out the first Wise Man’s cock.  My pussy was already soaking wet, and I could feel the moisture on my thighs.

Looking over at the third Wise Man, I started laughing at his baby dick.

Then, he pulled threw me right down next to the sissy, spread my legs and fucked my brains out.

Part II The Second Day Of XXX-MAS by London

Part III The Third Day Of XXX-MAS by Nicky

Part IV The Fourth Day Of XXX-MAS by Angel

Let me know what you think of my Fantasy sex stories – Phone Sex.