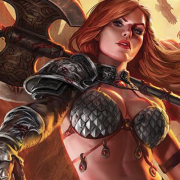 Fantasy Redhead Warrior fearlessly fights to ensure the safety of her village.

Fantasy Redhead Warrior dropped her ax and swung her mighty sword for what felt like an eternity. So many fellow countrymen and women fought bravely as well. Unfortunately, many courageous people died throughout that blood-soaked day because the enemy was cunning and quick. Our incredible heroin stood tall after the last invader had fallen under her heavy ax. They were looking down until he had taken his last breath. The life slipped away from this unknown rival and then the day was done.

Knowing deep within that the war was not over at least the people could rest. This born leader knows there will be more attacks. This was just the beginning of something much more significant. The Fantasy Redhead Warrior did not recognize any of the people her tribe fought. Those faces were all strange and had no familiarity with them. It completely escaped her line of logic because she had no clues yet. Troubled by this mystery, she stared a moment longer into the mud-covered face of her fallen foe.

The loyal hawk soared above showing his virtue high in the smoke-filled sky. With a great wingspan like his, a job scouting would be a must. This protector of her people would need a plan if they were going to last the week. Ordering every surviving woman, man, and child to gather the remaining supplies and shelter.

Forming a circle of communal protection the people took solace.

Returning back to a humble straw-covered sanctuary the Fantasy Redhead Warrior went to rest. Waiting near a small fire atop a thick fur-covered bed was a clean, soft, supple blonde. A girl who has watched Red many times before. Sliding her leg alongside the other while sitting to one side in a very seductive pose. The hungry blonde licked her plump pink lips with lust and adoration. A protector in need of a sensual reward fit for a combatant with integrity.

Throwing the soiled ax and sword to the floor Red moved in closer shutting the canvas behind her. Feeling the warmth of the fire and looking upon the soft untouched flesh of a blue-eyed angel she continued inward. This angel of light and comfort rolled to her back as Red laid on top of her exposed skin. With Red still in a heightened state of sensory awareness, she could smell the subtle scent of a beautiful pussy. Lesbian Sex would begin slow, with a deep pressing grind.

An erotic full lip rotation and tongue roll would begin to intensify with plummeting fingers — juices flowing from both light and dark angles while moans filled the thick sensual air. Our victorious Fantasy Redhead Warrior was expressing a different form of Domination in the glow of the fire. A power to penetrate a wet pussy the same way she penetrates a heart in battle. Slow and methodical is a technique that serves Red in every way. Releasing a moan of pure pleasure in this night of passion had never been felt so intense before. An angel no more fell into a sound sleep of satisfaction.