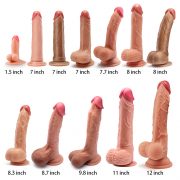 Playtime with an extreme insertion fetishist.

Extreme insertion is something my friends-with-benefits has always loved to play with. He has always liked to see how much his girls and fuckbuddies can take. We’ll call him Danny… And as far as I’ve known Danny, he’s had the biggest cock out of all my friends with benefits. It’s WILD. I don’t understand how a man can have such a big cock with it still being functional! He’s a solid, thick, sixteen inches when he’s totally hard and been teased for a little while. It’s impressive, and I’m so greedy for it, even though I couldn’t take it all at one point. Danny had to go very carefully and slowly when dealing with me. When I met him, I could only take about five inches!

That’s one thing they never show you in porn. There are tons of videos about big black cocks railing little white girls. But have you ever actually focused in on the cock and noticed how much actually goes in? The thickest and biggest of cocks can still only go in about five inches or so unless the girl is especially adapted for big cocks like that! Personally, I have always been so greedy for such big cocks but never been able to handle them. I’ve even played around with several black guys, and the rumors about their cock sizes are true. Nevertheless, it still took me a while to be able to take more than half!

Danny played a part in stretching me out.

Still, can you imagine me saying no? Fuck no! I wanted that thing. I wanted him to fuck me, and I wanted to fuck that massive toy and see how much I could fit. All my lust for big cocks and punishments was coming out all at once. He played with me for a little while. God, he made my pussy grow wet and juicy for him from all his taunting. He pinched my nipples and gave me a hot hard spanking that left me wet and lusty. I writhed and squirmed in his hands as he played with me. Honestly, I wasn’t going to last another five minutes of his teasing, and that’s when he finally slipped the toy in.

It was fucking massive.

It was an extreme insertion. There was no way I’d be able to fit it all in one go, no matter how much he teased me. But women’s bodies are honestly amazing. The more he played with me, the more he stretched me out and fit. First, it was five; then, it was eight. He worked it into me and fucked me with it relentlessly, fitting a solid twelve inches of it in me by the end of the night. I grew so wet and slippery for him; it was insane. My pussy was hungry for a big cock, and he could tell. The more that he fucked me with it, the more turned on he grew until he had to fuck me himself. He spun me right over into Doggystyle for that, giving my ass a hard spanking until I was begging him for it.