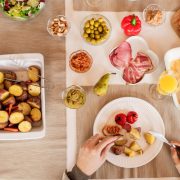 This extreme feederism fetish is not for the faint of heart!

In fact, I’m not even in this extreme feederism fetish story. My friend Pam is, though, and all of this was told to me by her. And I can’t deny that I found this to be a little sexy!

Pam came to me with concerns about her upcoming wedding to her husband, Tom. Pam and I go way back. We are both frat party sluts. The difference between us is that Pam settled down with a very nice, kinky man. However, I choose to remain free. (So many more cocks this way for me!)

Weddings stress out anyone, but Pam and Tom’s wedding was about two years away. It seemed an unusual time to get stressed out. But when Pam came to me, she admitted that she’d been gaining an unusual amount of weight recently. “I can’t fit in anything,” she nearly cried.

Well, not to let a fellow girlfriend suffer, I walked her through her daily routine. Tom always made her a big breakfast: eggs, sausage, toast, and juice. And though she worked out, she always took him up on a protein shake after. Tom packed her lunch, which was calorie-dense. Lots of fried food, which wasn’t filling, really.

And then Tom would have dinner, and usually something for dessert. The calories were more than triple what she needed.

“I like being pampered, and he likes cooking,” Pam explained. “But how do I say it’s too much??”

When I asked about telling him no, Pam responded Tom always took it personally.

That’s when it hit me. “He’s got an extreme feederism fetish.”

Pam asked me to be the mediator as she confronted Tom. Sheepishly, Tom admitted that her extra weight turned him on. “I like watching you push yourself to eat food.” Plus, he added that he liked feeling her plump belly afterward.

Pam was quiet for a moment. Tense silence ate away at all of us. At one point, Tom began to speak, but I cut him off with a wave of my hand. Pam wasn’t upset. Instead, I knew she was thinking.

They agreed to a few rules. Tom didn’t get to feed her every day– that was unfair to Pam, who wasn’t aware she was being used as an object of his fetish. She asked for it to be equal. She wanted to engage in it with him. To that end, she requested if he did give her food, she asked that it be healthy.

Tom agreed. He also agreed to limit his fetish to certain scheduled dates, and Pam agreed she’d do her best to eat as much as she could.

Reading the room, I excused myself. As I waited for my uber, I heard Pam crying out in ecstasy.

When it was time for Pam to indulge, she invited me to watch. Tom had made up… well, an entire table of food. His request was that she try each thing at least once. Her request was that he choose somewhat healthy options, rather than the deep-fried things he put on.

So, let me help you picture the scene. On the table were meats, roasted root vegetables, tomatoes, bread, cheeses, olives, nuts, fruit platters, hummus spreads, and pesto spreads. There were a few pizzas, and berry smoothies made with greek yogurt. Since Tom and Pam talked about his extreme feederism fetish, Tom made as much food as he wanted for today. Unsurprisingly, it was enough to feed several people.

And the best part? It was delicious. Anything Pam didn’t eat I’d get to take home, as a thank you.

Part of Tom’s enjoyment was seeing her burst out of those clothes. So, Pam dressed in the tightest fitting shirt she could, with the tightest pants. Taking a deep breath, she picked up a piece of bread and began putting a spread on. Next, she smiled at Tom. Though her hand shook a little, she placed the bread into her mouth. Cherry-red lips squished around the morsel.

As seen by the tightness of Tom’s pants, he was already hard.

Finally, Pam called it quits. Honestly, she began to waver early on. I expected her to quit early. But she soldiered on and ate almost half of Tom’s prepared food.

Then, as agreed upon, Tom helped her back to the sofa, rubbing her stomach as she burped. “Too tight,” Pam muttered and began to unbutton her shirt. I know what you’re thinking. But, she wasn’t making it up for Tom’s extreme feederism fetish. Her shirt was too tight, and her pants left impressions on her skin when she opened them up. She stuffed herself as full as possible without vomiting.

And again, I noticed Tom’s other hand, the one not on her belly going lower. Then, he leaned in to kiss her.

And once again, I excused myself before they started fucking in front of me.

Maybe you’ve got an extreme feederism fetish. Or maybe a different fetish? Call me. Let’s engage in some judgment-free exploration phone sex!