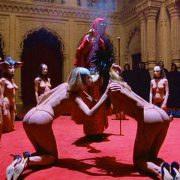 It was Halloween night.

I told my husband I was going to a party in the Upper East Side.  However, I already knew he would have an excuse. “Honey, a party sounds wonderful, unfortunately, we are having an emergency meeting.” He said, trying desperately to sound remorseful. Subsequently, I was already dressed, with a mask hidden in my clutch. I watched him get into our town car and noticed he was carrying his briefcase. I left shortly after, calling a town car. The directions lead us to large Victorian style gates. Once opened, we followed a winding road taking me to the manor.

I walked to the large looming doors and knocked.

Once opened, a man began to greet me “Mistress standing before me, what are the words I will hear to be?

He bowed, pointing me forward, where a cloaked man stood. The man wore a velvet burgundy cloak, with a mask on his face that anyone would find unsettling. It had a long rounded nose, resembling something nearly phallic. I followed the man accordingly, who led me to two women. They stood before me, almost completely bare. They were beautiful. A blonde and a redhead, both with large natural breasts uncovered, with only diamond thongs covering their genitals. They wore gold masks that covered their faces. After taking me to a room, they undressed me while they began to rub me with a wash-cloth.

I felt as though I was being cleansed of who I once was, though they never actually said a word.

They gave me a robe to cover myself, but I couldn’t help but admire myself in the mirror. My mask was black and feathered. Simultaneously, I was imagining my husband looking at all the sparkling cunts, and how many he would conquer. “Would he recognize me?” I thought. There would be a bevy of beautiful women distracting him, I later found out.

A circle was beginning to form in the room I now was.

Several doors opened in this massive room, each followed by another beautiful woman. A cloaked man came out and came to the center of our circle and began speaking in Latin. Hundreds of cloaked, masked men came floating in, surrounding us. The men began to circle, moreover analyzing our every curve, like a predator waiting to pounce. My nerves caused me to shake, only drawing more men to my attention. Two men grabbed my hands and took me to an open room.  My diamonds beginning to slide to the floor, as one man’s mask came up just over his lips.

He began tasting me, sliding his tongue inside.

Meanwhile, I looked into the other room and saw a man staring at me. In the distance, I could see him fucking a girl from behind when he…

In the meantime, for Hot Phone Sex Call: