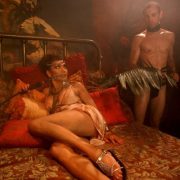 When you start off on the adventure of a vacation, the last thing you think of is a headline like this: “Egyptian Sex Slave Vacation Gone Wrong! I mean, really? Who has this kind of shit happen to them? No, no. I’ll answer… It only happens to ME! lol. So, it’s no surprise that while still an undergrad student in Washington D.C., I met a hot guy with a ruddy complexion, dark, shining, curly hair and the kind of swag only a foreigner has. How do I know? Cuz, I’m a foreigner, Baby! lol.

Amir stood before me and Sara (one of my besties) smirking as he said his name as if we’d know who he was. His large, manly hands came from under his thawb and I glanced down to see he was wearing Nike sports trainers and jeans under the robe. I knew right then, I would fuck him. And that’s exactly where my Egyptian sex slave vacation went oh, so WRONG!

I took his card and agreed that Sara and I would join him for dinner at Dabney’s on Glagden Alley in NW, DC.

Impressive. Furthermore, Dabney’s is one of the few 5-Star restaurants in DC, but it still makes you feel like you’re inside a home. It’s got a slick, yet sexy vibe to it and so did the super charmer, Amir. He stood as we approached the table where he had already ordered drinks for us. Um, HELL NO, Mister Roofie! Plus, I don’t know what he was thinking, but independent women don’t care for men ordering for us. Anyway, he was still cute.

We ate and drank and had a genuinely great time and as we pulled away from the curb in a sedan he’d called for us, Sara started to pass out in the cool air generated by the open windows. I leaned back and let my eyes close as well.

Waking with a head-banger and a feeling of… flying!

I sat bolt upright grabbing the armrest on either side of me. My first vision was of Sara lying limp and strapped into a chair. I was just adjusting to this familiar, yet strange atmosphere when my eyes fell next on the clouds drifting by out the window and I absolutely PANICKED realizing we were aboard a fucking airplane! What the fuck? I envied Sara at that moment because she was at least ASLEEP for this horror!

Next, I became aware of another person sitting just behind us and in complete darkness. This stranger in the shadows quietly, but forcefully said, “Welcome aboard. Your friend there is a happy find. We were only after you, Josette.” My heart stopped hearing Creepy McCreeperson say my name in the darkness like that. Adding, “You ladies are about to be treated to what’s known as an Egyptian sex slave vacation. I cannot say that you will love it, but it certainly will be an adventure…” His voice trailed off in an almost dismissive manner.

I didn’t know whether to cry or scream or look for a parachute!

None of my choices mattered since we were cruising at around 35,000 feet. Immediately deciding not to try to fly since the stranger had said at least two words that I wasn’t too offended by. I know. I know… We were kidnapped, but you know what they say… “sometimes, you’ve got to go along to get along. So…” There was a low chuckle coming from the cloak and dagger section. Ugh, But, I smiled and said with friendly confidence, “So, what exactly is an Egyptian sex slave vacation? (in case you don’t know me, the two words I fancy here are Sex and vacation, Baby!

Sara came to and after her own panic attack, we devised a way to not only survive this little Egyptian sex slave vacation. Thankfully, we’ve known each other most of our lives, so with a few eye gestures, we had locked down how to blow them… and their minds on this hot little vacation.

An Egyptian sex slave vacation is all how you look at it. We had decided to turn it into an adventure.

We showered in the staterooms and laid out for us were beautiful black abayas. So, I had to remind myself, I was a kidap victim! Haha. Sara and I stepped out at the same moment and eyed each other wearing our pretty new clothes. Then, once inside the sedan, and, finally face-to-face with Mr. Weirdness and this time we could see his one staring blind eye. He laid out the grounds under which we would perform for the sheikh. Ah, so he’s who had paid for us!

Then, the doors opened and several women ushered us inside and started taking off our abayas and replacing them with sort of ‘I Dream of Jeannie’ scanty outfits. Entering the large moodily lit tent, we did as we had been told to do and got on our knees in front of, Amir?? Sometimes, you just have to lift the red veil and take chances.

Oh, this Egyptian sex slave vacation might not be all bad.

For now, we licked him in places that he longed for and at one point, he even allowed my tongue entry into his fine ass. Amir moaned and pushed back against us and we took him further than he’d ever been.

This Egyptian sex slave vacation was one for the books. Wanna reenact it with me and get some hot phone sex? Call me and let me fill you in on how this all worked out.