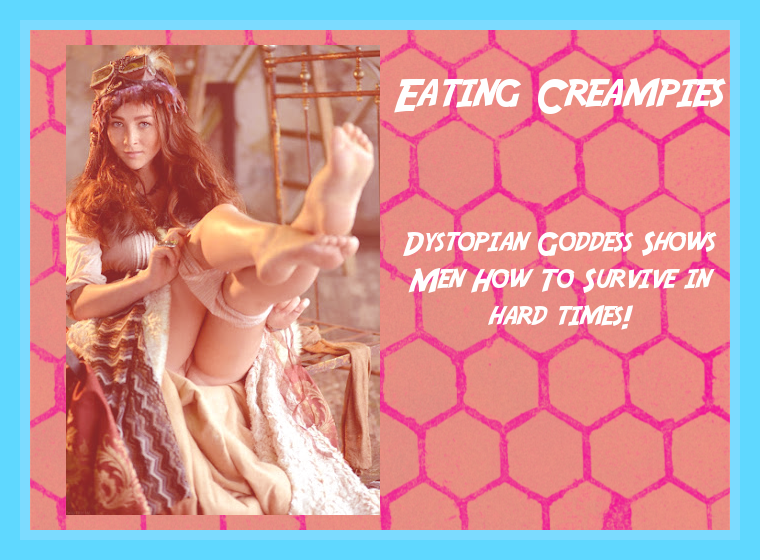 Pat Riley would not be caught eating cream-pies in his old life.  Rich and handsome and relatively vanilla- Pat had no time for much of a love life anyways.  That all changed two years ago when the Sudden War happened, and America found itself living a very dystopian reality.

The once-proud Pat had spent the last few years slinking around, taking shelter in old semis, and eating outdated gas station soup from the can.  Not exactly luxurious, and he was desperate to get some normalcy.  He would get just that, but not quite the way he imagined.

“You will eat well”, was all he got out of him.

The day he met Goddess Lulu, he was struck by her beauty because women were rare in the South West.  Most had flown East or North in search of other women and more tempered weather.  So, seeing this marvelous creature was something of awe.

He noticed that a harem of post-apocalyptic men surrounded her.  They were buff, rugged compared to Pat. Did he have a place here with Goddess Lulu?  Yet, she offered him room and board in exchange for labor. He felt that it was a godsend, but hearing about dinner, lunch, and breakfast every day, made him uneasy.

“You will eat well” was all he got out of him, so he left it at that.

A guy who had taken to Pat and was helping him settle before the raid explained things to him.  Goddess got eggs and toast for breakfast, salads and soup for lunch, and hearty casserole for dinner; however, the men in the camp would be eating cream-pies. Pat looked at his new friend, Tim-Tim perplexed, unable to understand how he would survive eating cream-pies.

The raid was of a small community of ex fraternity boys hoarding a small marketplace.  The pickings were slim, and the college kids had consumed every ounce of alcohol.  They picked up what they could.  Things of ramen, salted peanuts, black licorice, but Pat was concerned at the lack of pies.  He wondered if that meant Goddess Lulu would be eating well tonight and he would sleep hungry.  When explaining his concern to Tim-Tim, he was met with explosive laughter and a large slap on the shoulder.  “You will eat well” was all he got out of him, so he left it at that.

Sitting at the foot of the Goddess’s bed with Tim-Tim, Jorge, and Little Dan, Pat sat wondering what he was doing.  Had years in the desert left him unable to make good decisions?  Tim-Tim spoke to Goddess Lulu about the great hall they brought back, emptying a sack on the bed of sugar candies, jerky, and seltzer water. Goddess Lulu smiles in approval before spreading her legs so that Pat saw she wore no panties.

Her pussy is pink with wild red pubic hair, sticky with excitement.  His eyes are wide and zeroing in on the target zone.  Such a promising hole was pulling him in, begging him to taste.