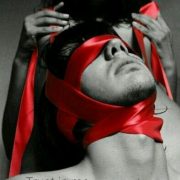 We Shared Our Favorite Fantasies

My boyfriend confided in me he had some secret kinks. So we traded our deepest and darkest fantasies to one another. His desire to be in his own personal domination story was interesting, to say the least. It’s Christmas time now of course, so I wanted to make it a holiday affair. I thought about it a few days and came up with a plan I thought he’d like. He had confided in me he wanted to be fucked up the ass, so I bought a strap on to use on him. I’d gotten many yards of a red satin ribbon I’d used for decorating and had some left over. I thought it would add a certain festive touch to the evening ahead. This was not simple sex lessons.

He Was into this domination story

I was dressed in some pretty dark green satin lingerie. I told him to wait for me naked on the sofa. I came up behind him and wrapped some of the ribbons around his head like a blindfold. He liked how this domination story was going already. I led him into the bedroom where more ribbon had been tied to each bedpost. I laid him on the bed and tied up his wrists tightly. Then his ankles were tied and he couldn’t move. I stepped into the harness for the strap on and got between his legs. I got out the bottle of lube and generously lubed up the toy before aiming it at his asshole.

It May Have Been More Than He Bargained For

He gasped and flinched as he felt it and as he gasped I went for it. I slid it inside of him and he groaned as I impaled him with it. He had his feet tied. I put the soles of his feet on the bed and his knees were up. I had left some slack in the ribbon. And I pushed them back towards his chest a bit to really give me access to his ass.

I was all the way in with the seven-inch toy and he went wild as I fucked him with it. I could feel how tight he was. Nothing had ever been in there before, but he took it like a trouper anyway. His cock had started to grow hard and stand at attention as I was tying him up. With my use of the toy, he was fully erect and bobbing in the air.

I Creamed All Over His Face

First I pulled out the toy for a while and got up and squatted on his face. I commanded him to lick my cunt and do a good job of it. My thighs clamped down on either side of his head. I could feel his tongue slither up into my wet pussy. I rocked back and forth on his face as he worked my clit with his mouth.  And I was soon creaming all over his face. I loved how he ate me. I looked over my shoulder and saw his dick was still rock hard. And  I got down off of his face and straddled his cock. He loved how my hot wetness felt sinking onto him. I rotated my hips in little circles and made myself cum yet again and I knew he was going crazy.

He Let Out A Sound I Never Heard Before

I got back between his legs and popped the toy back up his ass. This time squeezing his dick in my hand as I fucked him. He bucked up off the bed with pleasure and I tugged at him. He loved being opened up by the toy and having me rub his cock at the same time. I knew it wouldn’t be long until he shot his own load onto his chest. I kept thrusting and thrusting and he let out an orgasmic scream I’d never heard before. The intensity of his orgasm was incredible.

Dana loves to do role-playing of any kind.

Dana is very good at any hot phone sex