Dirty Public Sex in the Middle of a Concert Festival 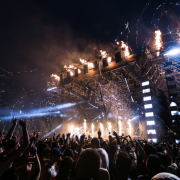 A dirty public sex adventure can be so much fun, though. It’s thrilling, exciting, and it gets me so wet that I can’t even think. This is probably the trashiest story I have to date. That even surpasses my glory hole slave stories from college! It’s naughtier than all my fetish phone sex nights spent hiding out in the dorms and dirty-talking my boyfriends while my roommate slept beside me, too. By far, one of the sluttiest things I have everyone. And honestly, I’ve had my fair share of adventures! I’ve done a lot of kinky shit… I’ve seduced and fucked my married neighbors, individually and then together. All my dirty public sex adventures even carry on to old college threesomes & even getting fucked at a movie theatre and in a car.

But this last summer, I hit a new level of reckless little slut. Do you guys know of the VANS concert tour? It’s a big group of rock bands that tour the U.S. in the Summer. They were holding one of their last US-wide concerts, so I finally made a point to go with a few friends. I wanted to make it count. After all, that time waiting to check it out, I was not left disappointed! But the secret is, it’s all because I went with a guy I was starting to really like. It was just a guy that I’d met a few weeks prior. Friend-of-a-friend type deal. He was a little taller than me, and I love taller guys: dark, spiky hair.. the works.

His name was Logan. I asked him and a few friends if they wanted to head out for the weekend. We arrived early because we planned to be there all day and night. So, of course, we wanted to get in as soon as possible. After all that planning, I wore the sluttiest little black short-shorts I could think of. Up top, I wore a tight little black tank top with a flame decal on it. The lace pressed against me so tight that I knew Logan could see my perky little nipples poking through. He couldn’t keep his eyes off of me, either. So my plan was working. We spent most of the way going from the set to the snacks, doing stupid things along the way.

I put all my effort into teasing Logan. I flirted with him through texts, sending pictures and dirty little comments all night. He couldn’t stop checking his phone to message me back. By the end of the night, he made it very clear that the feelings were mutual. So, I decided to get a little dirty as soon as we got some time away from everyone else. People still surrounded us; there was no way out of it. However, I didn’t know a single face in the crowd near us, so we didn’t care. I immediately pulled him in and kissed him. He wrapped his arms around me like he was going to pick me up.

Other people were making out around us.

But as soon as I rubbed my hand against him, to tease, I knew he wanted more. He tightened his arms around me and pulled me towards the nearby merch booths. The vendors had recently shut them down for the night. There were loads of people around, but I didn’t care. He picked me up and set me on one of the remaining display tables. He put his hands on my hips hungrily and ripped everything off, holding me against him. The music put me in a daze, too enthralled in dirty public sex to even think about who might be watching. I wrapped my legs around him to pull him closer, and he whipped his cock out in front of everyone.

It was dark and hazy, with weed and vape smoke in the air. The music played loudly, and the lasers and light effects covered the crowd and everyone near us. We were lost in a daze, and I was too fucking horny to care. And he just kept going and going. We tried not to make too much of a ruckus or throw shit around, so no one would really notice. But he didn’t stop for a heartbeat. He pounded me on that table without a care in the world, making me scream his name in the middle of the crowd. I still wonder if anyone noticed or heard us. Do you think you’d notice a couple fucking in the middle of a busy concert?