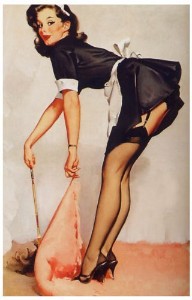 During my last year in high school, I started putting the word out that I was earning money for college by doing some house cleaning.  The truth was, I was trying to raise money for a summer trip to Cancun with my friends, but nobody needed to know that small white lie.

I made flyers and spent hours leaving them on front doors all over my neighborhood and started to get busy and pretty soon, I had a pretty substantial savings building up.

One morning, I got a call from a man named Leon.  He told me he desperately need his house cleaned.  He promised to make it worth my while so I rushed over.  He only lived about 3 blocks away.  I was wearing shorts and a T-shirt, but it was in the high 90’s that day and by the time I reached Leon’s house, I had worked up a bit of a sweat.

Leon let me inside and immediately brought me a tall glass of water which I drank in about three gulps.  His home was air conditioned, thank goodness.  He explained that his wife left him about a month ago and as he was never much of a housekeeper himself, the house was really starting to go to shit.

“I’m just too busy to bother with dusting and all of that bull shit,” he explained.  “I will happily pay you to clean it on a weekly basis.  I just don’t want to deal with it myself, you know?”

He showed me around and I could see that it had been neglected but it really wasn’t too bad.

“If you want me to do a really thorough cleaning today, it will probably take me about three hours,” I said.  “That will be $60 for today.”

“That’s ALL?” he was surprised and I immediately regretted not asking for more.  I think he saw a look pass over my face so he quickly said, “I’ll make it $100 if you promise you’ll come every week to keep it tidy.  Deal?”

“Yes! Deal!” we shook on it and I got right to work.  I finished in just under three hours and I must say, the place looked immaculate when I was through with it.  Leon had been sitting outside, on his deck, reading a novel and drinking beer.  I stepped out to let him know I was finished.  He was pleased with my work and handed over $100 as promised.  I put it in my back pocket and wiped my forehead.

“Aw, you poor kid.  You really worked your ass off on his hot day, didn’t you?” he smiled at me.  I chuckled and told him I could use another glass of water.

“I’m not old enough to drink yet.” I told him, although I was no stranger to the hop.

“Oh!” he snapped his fingers.  “Right.  You’re in high school.  Saving up for college, right?”

“Right.” I lied, thinking about the trip to Cancun that I was sure was going to be every bit as sinful as I hoped.

“I mentioned my wife left me recently, didn’t I?”  he asked.

“Yeah, you did mention that.”  I hoped he didn’t want to cry on my shoulder.  I really wanted to head home and have a shower.

“There are other things that I miss, you know, about being married.  Other than having a clean house.”  he began.

“Like… what?  Home cooked meals?” I asked.  I knew what he meant, by the way.  I’m not naive, nor was I back then.  I just wanted him to say the words and make an offer.  I was, after all, an entrepreneur.

“No, not home cooked meals.  I miss sex, okay?  I’ll just be blunt.  I miss sex, I miss pussy.  I miss having my dick sucked on every night.  I’m willing to pay for that too.” He pulled out his wallet again and pulled out another hundred and held it out for me.

“That will cover a blow job…” I said.  He practically ran to his desk drawer and pulled out a wad of bills.

“Uh.. so…” he hesitated. “What about for everything?  Two hours of just straight up sucking and fucking?”

“Let’s make it an even three hundred.”  I proposed.  “But I need a shower first.”

And taste it, he did.  He spent about a half hour just eating my pussy and he was really good at it.  I came about three times.  After that, I took his cock in my mouth and sucked him, edging him over and over, teasing him until he begged to get inside my pussy.

He handed me some towels and I took a long cool shower before I headed back home.  He gave me a long kiss at the door before I left.

“Same time next week?” he asked.

“Yeah, see you then.”  I walked home, smiling the whole way.  Thanks to Leon, I was sure to have a blast in Cancun and would most certainly be able to book a 5 star hotel! 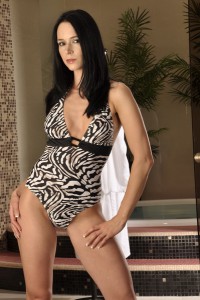