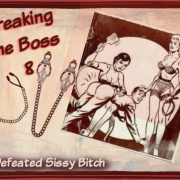 Once he was all buckled in, the next thing the ladies did was bring out a full-length mirror. They wanted their defeated sissy bitch to see everything they did to him. When he saw himself bound to the bed, wearing a kitten t-shirt and that ridiculous penis gag sticking straight out of his mouth, he seemed to lose it. He struggled and tried to scream but of course, he was completely ineffective.

The women completely ignored this and instead started to undress him. But because of the restraints, they quickly realized it wasn’t going to be easy. Undaunted, they all started to grab at his clothes and rip them off of him. Boss man was completely helpless as he heard them start to rip the fabric away. They got more and more excited as they made his clothes disappear.  The pieces were all over the floor and in their hands.

Of course, there were rules for their defeated sissy bitch

Once they had completely stripped him, their leader Emma gave him some rules to follow. She didn’t even need to tell him that there would be severe consequences for not following them.

Boss Lady asked if he understood and he nodded his head. She told him he was being a “good boy” and that he deserved a reward. She reached down and dragged her long stiletto nails up and down his already semi-erect little dick and down to his balls.

At that, he broke rule number 4 by trying to move away from her. He apparently did not like cock and ball torture.  At least not with long, sharp nails. This was good information to know. And then another lady took a turn and slid an extra slim and very tight cock ring over his modest penis, right down to the base.

No, please…not the nipple clamps!

His personal secretary claimed her turn by pulling out a pair of horrific-looking nipple clamps. They had jagged metal teeth and looked like they would inflict a tremendous amount of pain. She put one hand on his chest to keep him still and opened one of the two clamps. In a very sadistic move, she made sure that she gave their defeated sissy bitch a good look at the sharp metal instrument of torture.

He squirmed and twisted his body – it looked as if was trying desperately to protect his soft little man nipples from her. Two other women held him down while she placed it on his right nipple. It looked like the jolt of pain took him by surprise – maybe it was worse than he thought it would be. But it only got worse when she smiled sweetly at him and grabbed the clamp and slowly began to twist it.

The intense pain in his nipple ramped up to about ten times more than what he had previously thought was the worst pain he had ever felt. I could see him trying over and over again to scream through the gag but he could only manage a pathetic muffled sound. She was still smiling in a very unnerving way when she said, “this is for all those times you made me sit in your office topless and do my work!”

Next up: Nothing good for the boss man. I know that for sure.

And if you want to talk about sissy phone sex, need a bit of my own special brand of sex therapy or anything else just call me for the best phone sex you will ever have…