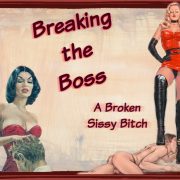 I was almost proud of boss man – he was proving to be a very obedient sissy bitch! The ass fucking and face fucking went on until I didn’t think that our abused boss could take any more. All three men pulled out and came all over boss man. He looked quite relieved even though the men left him an exhausted, broken and sticky mess. Truly a broken sissy bitch…

I knew that some of the women in the office would want their shot at revenge. But I was quite surprised when five women signed up! Unfortunately, with this many ladies in line, there was some disagreement over which one of them would get to go first.

I wasn’t concerned, though. They were a group of women, and I was confident that they would come up with a compromise. And they did. They decided that they would all go first. This group of angry ladies would work together to torment boss man. I knew that after that, he would definitely be a broken sissy bitch!

The first step was to release him from all of his restraints except the chain that tethered him to the pole.  The boss seemed relieved and a little grateful too. He must not have been very comfortable bound up like he was. He could walk around as far as the thick chain allowed him to. But I warned him that if he tried to hurt anyone or escape that he would regret it very much. I’m pretty sure he believed me.

Crushing his hopes… and other things

All five women walked in at once and stood just out of his reach. They looked like a pack of wolves about to attack. Emma, his latest victim, appeared to be their leader. And they were all dressed to dominate and to cause pain. The money they spent at the fetish gear store could probably have paid the sales person’s mortgage that month. It was a very dramatic scene – they all looked powerful and amazing. And our broken sissy bitch boss looked like he knew he was in real trouble. I could physically see his hope of escape crumbling away.

He knew right away that he had repeatedly touched, harassed, degraded, and humiliated each woman standing before him. And they looked strong and powerful. And very angry. Boss man looked like he was going to be sick. I warned him that if he puked on my basement floor, he would regret it. It didn’t seem to make him any less queasy, though.

Time for some fun with the broken sissy bitch!

Emma told him to open his mouth, but he refused. Even I was shocked when she pinched his nose shut. “You’ll open it eventually,” she said. As he struggled, she told him that this was payback for the time in his office just a week ago when he grabbed her by the hair and shoved his little dick into her mouth. Finally, as Emma had predicted, he opened his mouth to breathe. When he did, she quickly shoved the penis gag into his mouth and tightly buckled it on.

Next up – does he know how ridiculous he looks? Does he care?

And if you want to talk about sissy phone sex, need a bit of my own special brand of sex therapy or anything else, just call me for the best phone sex you will ever have…