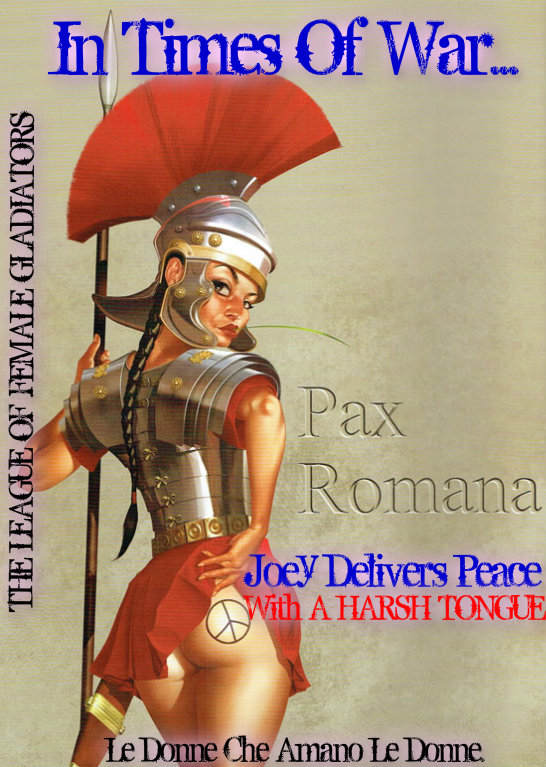 This is the story of the legendary, Deep Throat, Gladiator Girls. Legendary in Rome and parts south leading to the Mediterranean, because it was the all female contingent of the fearsome Roman Army.  And was forged by necessity due to the decline in males left alive (and unmaimed) to fight the battles. These women fought alongside the most brutal of males and learned the ways of war. This included the spoils thereof. They learned to fight, dominate and love just as their male counterparts did. Similarly, they developed debaucherous appetites for sex. Since they were housed by the burgeoning sex trade, there was a venerable buffet of tits and ass. If pussy’s your thing…haha, you’ve cum to the right place.

Entering the dorms cavernous halls, she could hear the goings on in the other chambers, but strode ahead toward her own treasure box…

There at the foot of her bed, she saw him. The Chancellor stood with a girl who was dwarfed by his over 6 foot frame. The girl, a petite red-head, with small bosom and tiny waist. He stroked at the bottom of her back as if to indicate he would happily take her from the Warrior Princes…if he could! To date, no man had the ability to do that…on the battlefield, perhaps…off, NEVER!

She walked over to the sweet, young thing and stroked a finger up her back which was covered only in a thin sheet of gauze. She felt the shiver of the girl and as she rounded her, she saw the eyes, go slack and glazed, rolling back in their sockets. The girl looked like she might faint just as the warrior caught her at the lower back and left breast. She sensed the wetness beginning in her tight young teen-ish pussy.

A nod of the warrior’s head bade good morrow to the Chancellor, who looked forlorned at being dismissed.

He had after all, found this rare, untouched treasure and was hoping to maybe be treated to the show. The double doors slammed shut and the warrior moved without haste, lifting the gauze sheet, exposing the young girl’s high, tight little ass. She licked her lips. But, the girl’s body was covered in a sheet of tiny goose-bumps and her nipples were fully erect and hungry. The warrior again lifted an upward palm to cup the underside of the girl’s breast and looked directly into her eyes as a soft smile crossed her lips.

The girl smiled back and blinked ever so slowly, letting the warrior know that she was hers. She lowered her lips to that same breast and began to lick. Slowly at first, then becuming rougher, wetter.  So wet that spittle dripped from the girl’s nipples. The warrior always wore a strap-on. Whether it was to feel more warrior-man like, or her desire to fuck at any moment available, she never spoke of. But, what was very clear in all her drunken revelry, was that she had a desperate fondness for all things pussy.

She parted her military skirts and showed the massive cock beneath it.

Lifting her young captive and parting her tiny legs,  allowing the girl to straddle her. She angled the strap-on cock upward and at an angle to slide deep inside the little virgin. The girl let out a heartrending scream, that turned quickly to moans of pleasure and began to buck on her lap.  But, just to be contrary and assuring the girl of who was in  control, she slid her off that big cock, just as she was enjoying herself and shoved that cock into her mouth. How else was she to becum a Deep Throat Gladiator Girl? So, she needed to be trained! “Twack, thwack, thwack”…the sounds of a spit covered cock forcing its way down the girl’s throat. Oh God!

The Warrior Princes threw the girl atop the bed and crawled between her smooth legs, kissing, licking, sucking and stroking as she went…and as she reached the mound of pleasure…she stopped. Once more, the girl writhed and wriggled beneath her…wanting her. The princess locked eyes with the girl and smiled a wickedly beautiful, all-knowing smile and lowered her mouth…to drink. She flicked and toyed with that taught high clit and teased it mercilessly. And then she moved on to her favorite parts…She flipped the little one over, foregoing the tight pussy and dove straight into her tighter than believable ass with her huge strap-on!

The girl let out a moan that threatened to rock the building and that drove the warrior on.

Her idea of foreplay was taking young maidens and turning them forever away from the men…Women who would follow behind her as if chattle. Well, they sort of were. She owned them…mind, soul and body!

So, I have recently discovered the writings of The Warrior Princess in an old book store and the stories of the Deep Throat Gladiator Girls…I now know what became of the young girl.  If you’d like to know too, call me…you won’t believe how this one turns out! Giggle