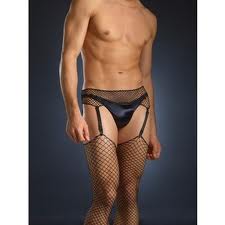 Daddy Likes To Play Dress Up

I remember the first time I saw my Daddy dress up and fuck himself in my Mom’s panties. My Mom was out Christmas shopping and I wanted to stay home and play in the snow with Daddy. After we played I was exhausted so after milk and cookies I laid down for a nap. About 30 minutes later I got up to use the bathroom. I had to walk past Dad and Mom’s bedroom to get to the bathroom. The door was cracked so I peeked in and saw Daddy standing in front of the mirror. His shirt was off but there was something odd about his bottom half.

I rubbed my eyes and pinched my arm to make sure I wasn’t dreaming. As my eyes adjusted it became clear that what I was seeing was my Dad in a pair of bikini cut black panties and a sexy black fishnet garter belt. He was rubbing the outside of the panties. I could tell that his cock was getting harder and harder with every brush of his hand. I didn’t know what was going on and I still sort of thought that I was dreaming.

He stood there posing and rubbing himself. I could tell that he was really enjoying what he was doing because of the look of satisfaction on his face. He felt sexy and delicate. I couldn’t stop watching. Even as he bent over in front of the mirror and waved his ass like a professional stripper. Even as he reached under the bed and pulled out a 7 inch glass cock and started to suck on it like a fucking pro. I mean, looking back on it today…my dad has some serious deep throating skills! I learned a lot that day from daddy on how to be the sexy bitch that I am today.

I dashed off to my room and got under the covers. I was trying to digest the huge chunk of reality that I had just been exposed to. Nothing had prepared me for what I had just witnessed and I was changed forever by it. Til this day I still like it when guys put on my panties and give me a little show. It reminds of that secret day when Daddy played and came right in front of my eyes.