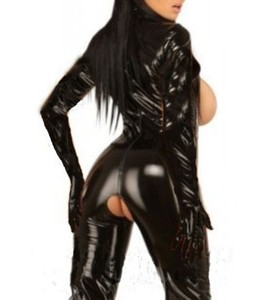 Going into an adult store and looking at all the different outfits they have is something I try to do every few months. They always have something new and it’s fun finding a new item to add to my wardrobe. Their latest arrival was a black latex catsuit that was low-cut and had a zipper at the crotch for easy access to my pussy. There was no way I was leaving without it so it came home with me and is now sitting in my closet. I wore it for the first time the other night and after the reaction I got I think it’s going to get a lot of use.

Will is one of my oldest fuck buddies, we’ve been seeing each other for about two years now and I love doing things to spice things up between us. I sent him a text saying “I need u now.” and he was at my place in just over an hour. I answered the door wearing my latex catsuit and black heeled boots. His mouth dropped open as he ran his eyes over me and I struck a pose. “Do you like my new outfit?” I asked him, fishing for compliments even though I knew I looked friggin hot. He nodded and I saw one of my neighbors walk past, giving me a look. “Hi!” I said waving to him and he blushed, quickly walking away. Will scowled, getting jealous of me showing off to other men, and he pushed me back inside.

He shut the door behind us and asked when I had gotten it. “Don’t worry, you’re the first one to see me in it.” I told him, making him feel better and went to the bedroom. He followed me, taking his shirt off and undoing his jeans as he did so. He was practically naked when we got there and he got rid of the rest of his clothes. He sat on the edge of the bed and pulled me on to his lap. he stared at my breasts, which were practically falling out of my cat suit and had latex stretched tightly across them. He squeezed them, his fingers sliding over me. I reached down and began to jerk him off while he explored my new outfit. He found the zipper and tugged it open, exposing my pussy. He touched my outer lips then pulled me off his lap, shoving me onto the bed. He leaned over me and licked the small patch of exposed skin. He pushed his tongue past my lips and lapped along my walls while a finger found its way into me. He licked and fingered me until my pussy needed a dick inside it. I nudged him with my leg and said “I want you to fuck me.” while trying to get him to climb further up me. “No, I want you on top.” he said breathlessly, rolling over and pulling me down on him. I held him and guided him into my pussy. He was so hard! This cat suit was really turning him on, I swear he’d ever been that hard before. I braced myself on his stomach and began to ride him, his hardness ramming deep into me. Our moans got louder and soon I was leaning over him as I came. He bucked his hips up, fucking me while he still could and came a few seconds later.