Cuckolding Humiliation Sex: Stuffing My Admirer Under My Bed 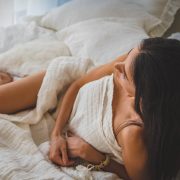 Some men don’t want the girl; they just want the cuckolding humiliation sex that comes with her.

Sometimes, you just know a guy is beneath you, and his only worth is in amounts of cuckolding humiliation sex. I glance at him and know he’s an idiot and know he isn’t worth anything.

I knew a guy like that back in my early days in college, Steve. He followed me around, giving me roses, chocolates, and cards. It was very sweet but very pathetic. I never took his gifts, but he kept giving them to me. He’d find me after class. After a few words of conversation, he’d pull out a gift. Then, he’d throw it in my hands.

Finally, fed up with his forced gift-giving, I threw the gift on the ground, crushing it underneath my heels. I was about to yell at him to tell him off, but then I noticed his face behind his glasses. His pupils were wide, and his face red with sweat. It wasn’t anger. He was aroused. Cuckolding humiliation sex was probably his jam, I thought.

Well, I thought, finally something to play with.

“Eyes on the ground, worm,” I snapped at him. Immediately, his body came to attention. Meanwhile, his eyes fell on the ground, on the gift squished under my heel. “Don’t waste my time with meaningless gifts, you understand? This means nothing to me.”

“I didn’t give you permission to speak yet, worm,” I snapped and motioned for him to get down on the ground. Despite the now obvious bulge in his pants, he crawled down to his hands and knees. Surprisingly, he kissed my foot without prompt.

“I’ll tell you what you can give me.”

Stuffing Steve Under the Bed

We went to my room. Luckily, my roommate was out, but I didn’t waste any time checking for her. I slammed him onto my bed and began stripping off his clothes. Honestly, he looked like a lost puppy for a moment, confused as to why I was taking off his clothes. Of course, like the pathetic man he was, his cock was interested in the goings-on, even if his brain wasn’t.

I put him in handcuffs and turned him around. “Shh,” I told him, covering his mouth. His eyes were still wide and frightened but still aroused. “I’m going to put you in this chastity device, and I’m going to gag you. Then, I’m going to shove you under the bed. Once I’ve decided you’ve been a good boy, I’m going to call up one of my fuckbuddies, and you can listen to me fuck. That’ll be enough for you, right?”

It was pathetic. Tears were in his eyes, but he nodded. His cock smeared pre-come on his belly. “Tell me you understand, worm, or else I’ll let you go right now. You seem like the sort to disappoint me, shithead.” This would be in his top embarrassing sex stories.

I slapped my hand over his mouth before I heard any more of his incoherent babbling. Like I promised, I put a gag into his mouth– a penis gag for him to suck on. Then, I grabbed a quick chastity cage and forced his hard-on into it. His hips squirmed back and forth. But, he thanked me, falling onto the floor. I kicked him underneath the bed and lowered my bed skirt.

True to my word, I called up my fuckbuddy Kevin, one of the football players.

So, it didn’t take long for Kevin to show up. I’ve got a quality pussy, and it’s always in demand. Hence, I didn’t want Steve to tarnish it with his beta male taint. And as to why I chose Kevin? Kevin was our star football player. He was big, broad-shouldered, smart, and talented. A true man. An alpha male.

Plus, Steve knew him. So, when I called Kevin, I heard Steve whine a little, as he should have when faced with superior material.

Sex with Kevin was rough and quick. He opened the door and my pussy was already slick from playing with myself. “Go on and use me,” I told him. He laughed, a deep base laugh like all good men have, and didn’t even take off his clothes.

“Gonna come inside you, bitch.” I couldn’t help myself. The moment his cock slipped inside me, I began begging him to give me his seed. Beyond my begging, I’m pretty sure Kevin made me come three times (maybe four) before he emptied himself inside me. Our sex done, he pulled himself back into his pants, thanked me, and headed off. No cuddling, no kissing, just pure sex like I wanted.

Once I knew Kevin was gone, I hopped off the bed and dragged Steve back into the light, ripping out his gag.

“Clean me up,” I demanded. Then, I squat over his face.