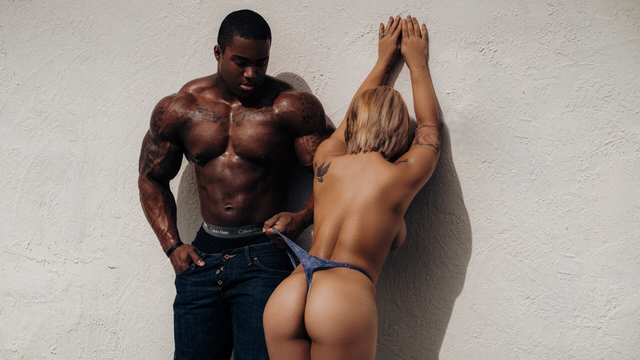 I don’t know why my sister married a black guy when she has always complained of disliking sex. We have always heard that black men are notoriously great lovers. She has complained about him always wanting sex since they first married. I always thought she was being a bit of a bitch for complaining after all he was built like a God and oozed sex with every breath he took. Desperately I wanted to see this huge black cock I had heard so much about.

I guess it was wrong of me to seduce him but I felt it was such a waste that no one was fucking him right! It happened after a party that was being held one night at their house. Pretending to be drunk my sister insisted that I was to stay with them but I complained I had to go home. So I asked my chivalrous brother-in-law to please escort me. Of course, he did not refuse and my unknowing sister encouraged it.

Pulled his hands to my tits as I massaged his dick!

I tripped trying to get inside my house and he swooped me into his arms and carried me the rest of the way. He was so strong it was as if I weighed nothing in his arms. I asked him to please help me inside and he did laying me on the couch. As he went to pull away I tightened my arms around his neck and kissed his mouth firm but soft too. He reacted by pulling away and saying no. I ripped my blouse open shredding the buttons from it. Pulling his hand to my tits and pressing my nipples into his palms. Then I began massaging his growing crotch and leaned in to bite his dick through his pants lightly.

He grabbed me by the hair and shoved my face harder onto his dick. I smiled but then he pulled away again and said no this was wrong and started for the door. I quickly darted in front of him blocking the door knowing he could move me if he wished.

My sister does not satisfy you in bed. I know that. Let me it will be our secret it will be hotter for it. I won’t ask anything of you to accept sex, promise to be discreet. Don’t you love sex? I want it with you saying that I dropped the rest of my clothes and stood naked before him. My pretty pink bald pussy my high large breasts with the nipples pouting for his mouth. He dropped to his knees in front of me and kissed my stomach and traced with his tongue all the way to my clit.

Lifting me he placed my legs over his shoulders and ate my pussy with an enthusiasm of a starving man. I came three times on his face before he finally relented. Even though I was weak I was not done yet I craved his dick and I needed it in all my holes.

I went to slide to my knees to take him but he would not let me just slammed me against the wall and shoved his 10-inch fat cock deep inside my pussy! I screamed with each thrust being torn apart yet loving it at the same time. My pussy stretched and took him soaking his dick every time he slammed inside me!

He claimed all my holes!

Would you like to hear more about my whorish ways? Perhaps you would like to see if you can fuck me better than this? How do you have phone sex? I would love to know, give me a call and maybe I will be writing about your fantasy. If so, then I will give you free phone sex with your next paid call. Just call me and tell me you are the best phone sex guy for me!