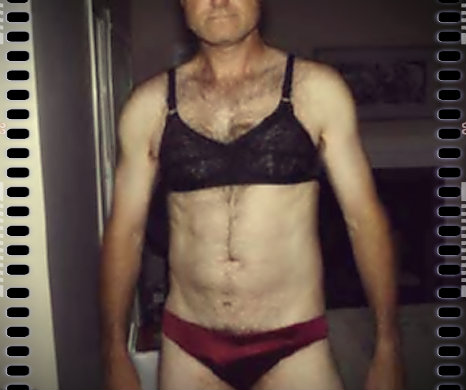 “Once you find the definition, I want you to write me an apology letter for being such a sissy faggot and beg me to not divorce you. When you’re done, print it out and go stand in front of the closet wearing my underwear and wait for me to call you!”

I turned toward her as she lifted her ass off the bed and slid her panties off. As she tossed them to me with a smirk she said, “I want you to do one more thing. Once you’ve done your little cuck research and your little writing assignment.  I want you to put the crotch of these panties on your nose while you press it to the mirrored closet door.”

“And You are to stay like that until I say otherwise!”

There I was, looking at the reflection of myself in the mirror with Bridgette’s worn panties pressed against my nose, and as a result, I could smell the sweet scent of her pussy as I was forced to stare at myself wearing her panties and bra.

That’s when I realized with shame how stupid I looked, and the more I stared the more I understood why she felt such contempt for me. As I strained to hear what was going on in the other room, I thought I heard her moan.