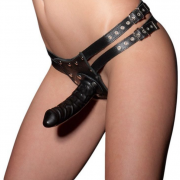 He guided me all over the mall at first. We ended up at Victoria’s Secret at one of our first store stops. Can you imagine him trying to act tough, pretending like he wanted to stay outside of the store? He knew that I’d make him come inside the shop with me so that I had more time actually to look around. I also wanted him inside the shop to ask him for his opinion on certain things and tease him with them. I made his jaw drop a few times from the little frilly thongs I would pick out. There was this one thing that had sparkles and crystals on the straps that go over your hips.

I didn’t realize he was dying to wear it himself.

He can get so naughty sometimes. After we actually got home with some of my lingerie, I started noticing that some of it would go missing. I would leave my little thong out on the bed since I planned to wear it out later that night, invite him over, and it would go missing for days. One time, I was going to approach him about it. However, I walked past the bathroom and saw him wearing it and playing with his cock. He wasn’t jerking off, though. He was playing with himself like he would rub his clit if he had one.

It was another dirty little secret.

But I knew he wanted something bigger. So, I added a few more toys to the list. I picked up some juicy, mango-flavored lube, a thicker butt plug, and a nice twelve-inch strap-on, and we were all set to go. I packaged it all in a nice little black velvet bag and saved it for the next time he came over. Of course, he waited until I was done fucking another guy before he stopped by. He’s all about that cuckold phone sex, so he came over to eat me out and hear all the stories. As soon as he walked in, he got his surprise.