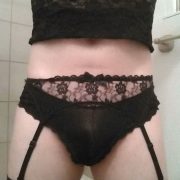 Are you ready to hear one of the craziest cross dressing stories ever? It’s pretty insane, but you were warned. It all started back when I was finding panties, bras and other undergarments that weren’t mine in the laundry. Eventually, I narrowed it down to an affair after my husband tried to say they were my undergarments. Women know what’s theirs and what’s not. These lingerie items were not mine; these were a bit more slutty then what I own. And I was sure he was having an affair, and the bimbo was leaving her panties in my house to rub it in my face. It’s what I would do if I were sneaking around with a married man. Now we don’t have a normal type of marriage; I refuse to fuck him because of his little dick.

But just because I’m not fucking him doesn’t mean he can do whatever. I, on the other hand, can do whatever I please but he cannot. As you can tell I wear pants and I have complete control. And he certainly in no way will get my permission to have a side bimbo. We do have a sex life; it’s just not the husband-wife sex life. Our sex life is me fucking other men while he watches. I let him jerk off and sometimes I’ll let him lick my pussy after some guy cums in it. Other times I use him to get the guys hard so I can fuck them. He’s like a pet; I let him out for a little bit then I put him back in his cage. Don’t go feeling sorry for him we had an agreement on this before we got married.

The day I caught my husband in an affair

I decided to come home early after finding his secret phone with a naughty message in it. The number had no name. The news from my husband said he was going to call into work and they could come to the house. At the end of the message, my husband says miss you sexy. I parked in an empty parking lot a few doors down from our home. I peeked in the windows but couldn’t see anything. It ended coming down to me sneaking in the house through the basement. Walking up the basement stairs I heard spanking, and a girlie voice moan. Now that I have listened to it I need to see it. Quietly I remove my heels and tiptoe up the stairs. Making my way down the hall following the sounds of spankings and moans.

The door is open enough for me to see inside, but it wasn’t what I thought. There is a man that I don’t know sitting on my bed and between his legs is another woman. A woman I do not know, but I can’t see her face either. She is dancing on the guy, and when she bends over, he spanks her ass. But then I caught a better look and its not a woman it’s my husband! My husband is a full on cross dresser. He’s wearing a wig, makeup, lingerie, and shoes! I watched him for a few more minutes I even watched him give the guy a blowjob. And then I busted through the door making my presence known. I revealed his small cock to the man sitting in front of him. We laughed but what I forced him to do next is hilarious.

Keep watching my cross dressing stories for more of this story.  Sissy boys in need of a little dress-up fun give me a call. I want to dress you up and play with you! Ask me how to get free phone sex minutes with your paid call. Want more free sex stories? Read them here.

One Reply to “Cross dressing stories: Husband caught dressing up and sucking cock”