Cross Dressing Sissy Wears My Heels For The First Time 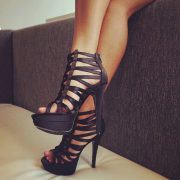 My cross dressing sissy always fawned over my heels.

I could have gone with any cute, flirty name.. I could have even called her by a stripper name, like Roxie or Diamond. However, my little sissy loved ‘Diana’ because it was a reference to Wonder-Woman. He loved the thought of dressing up in her outfit and a set of pretty heels. It made her feel invincible – and sexy as hell.

One day, I finally let her have her dream.

She got to wear a sexy Wonder-Woman costume that she’d gone shopping for. My cross dressing sissy fell in love with every detail of the outfit, from the wig to the panties. After she had everything laid out on the table, I went ahead and left the room for a second. While she was fawning over the outfit she was going to get to try on, I was looking for my set of all-black stiletto heels. They were a stunning little pair, with an open peep-toe, and a small bow on the heel strap. Once I’d found them, I walked back in and proudly presented the heels to my cross dressing sissy. She practically fell apart in front of me, mouth wide open and cheeks blushing from excitement.

The heels completed the outfit beautifully. We set all the clothes up nicely beside each other, and my little faggot finally dressed up right in front of me. I sat idly by as she put on her wig, her dress, her heels, and finally started doing her make-up. At this point, I stepped in to help. After all, it had to all come together perfectly for her to really feel like the sexy, vulnerable, yet independent woman that she was. With a few strokes of some bright red lipstick and a thin cat-eye for her eyeliner, I completed the look.

She became a queen right in front of me.

You could still see a little bulge of her package under the skirt, but I think that’s what she wanted. She showed off some major bulge with her outfit, but the sexy get-up and all the curves made up for it. It was a constant reminder of where she stood. She was my little toy, all dressed up like one of my old childhood Barbie dolls. I think she liked the idea that I’d taken a sweet Ken doll and glittered it up to play with the rest of my female dolls. There was something about that idea that made her feel like a pawn in my little game, a true submissive sissy, letting me bring her fantasies to life. She went on to become the star of some of my best shemale phone sex dates.