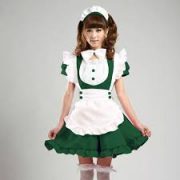 Crossdressing isn’t always fun and games.  Sometimes, it’s necessary to put food on the table.  And the funny thing about being a maid is how little background research is done in most cases.  It’s not like potential employees sit one down and ask how long they’ve been scrubbing toilets, and dismissing someone if they have less than two years of experience doing it.  No, employers only care about one thing; how cheap you are.  Especially if they are wealthy, ironically.  If one person is asking for nine dollars an hour, another for seven, and the last for four under the table, well, we all know who’s getting hired.  But among those cheap maid-hires, there is one way to stand out among them.  Be hot as fuck.

Randy’s got two weeks to get his rent paid or spend the first winter of 2020 on the streets.  If it’s between digging for food in the dumpsters behind restaurants and cleaning a few toilets, he’d happily swallow his pride and slide on some gloves.  I told him how this kind of thing worked in reality, though.  Anyone with the money to pay for housekeeping is gonna want something cute to look at.  If he wanted to get the job, he was going to have to play the game.  After finding an ad that seemed promising and needed someone to start ASAP, I encouraged him to add a headshot, too.  With a little help from me, I was able to doll him up pretty well.  Honestly, Randy cleaned up nice for a dude.  It didn’t take long for him to receive a response.  He got the job.

Now, to pretty up the rest of him.

Not gonna lie.  It was fucking funny.  As a stripper, I had a whole slew of costumes in my arsenal.  Watching him put on my sexy maid costume was hilarious.  Not because he couldn’t pull it off.  He totally could.  I just had to shave his legs and teach him how to walk in heels.  That was the entertaining part.  Listening to a man say over and over again that he swears he’s just doing this for the money had me rolling.  He swore up and down how he didn’t like it and that he’d never do this if it weren’t necessary.  Once I was satisfied with “Rachel,” I patted him on his behind and sent him on his way.  We’d see how much of that was true by the end of it all.  I personally know that when one needs money, there are fewer and fewer bridges one isn’t willing to travel.

The house was amazing.  Extremely large and incredibly fancy, Randy spent most of the house tour with his jaw dropped, and like a real amateur, he didn’t realize where they were going to end up.  The journey predictably ended in the master bedroom with his first instruction to clean the sheets.  Randy inspected them.

He fell forward on the bed with a large pair of hands groping him.  He heard a zipper unzip and felt a tongue against his neck.

Now, I’m not gonna call Randy a fucking whore for taking this offer.  Whores would charge more for the entire night.  No, he was a cheap ass slut right there.  The kind rich men love.  He wasn’t thinking about his cock or how he was going to hide being a guy.  He was thinking about that sweet, sweet moolah and how in forty-eight hours, all of his money issues would be behind him if he just opened up that sweet, sweet bitch hole.  I guess all of that talk about not being into cross-dressing went out the window, and he must have worked some magic to hide what he was.  He came back home fucked hard and with cum dribbling down his legs.  I was shocked but not all that surprised.

“Yes,” was Randy’s response as he staggered to his bedroom with a few hundred dollar bills in his stockings.

Crossdressing is fun but knows the dangers.  It’s easy to fall into fuck-traps.  Are you a fucking whore or a cheap-ass slut?  Call my phone sex line and let me know what category you fall under.