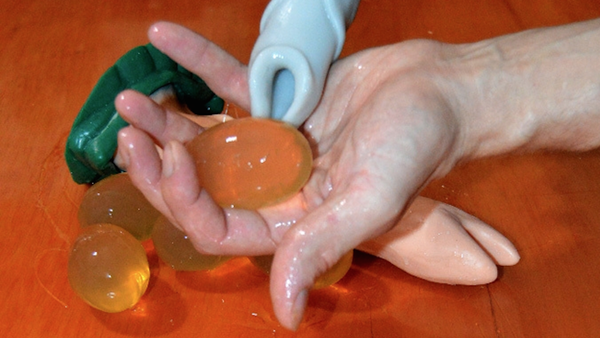 This is the final installment of my other crazy sex stories!

The next place on the ship where I found myself was on some sort of table, angled downwards. My legs were spread apart, just like they’d be at an OBGYN, and an odd, minty and steel smell filled my nose. Heavy metals, maybe?

It didn’t matter. Something pinched my arm, and blearily, I twisted my head to see what pinched me. A needle, maybe, though I could only see a thin, clear tube attached to my arm. Most of me was again, held down.

Although I didn’t know how all those words related to each other at the time, I do now. They were looking to get me pregnant. In that moment, though, whatever they’d made me drink earlier, whatever they’d filled me up with, had my pussy throbbing. I needed another orgasm. And I needed it now.

“Please,” I attempted to say, but it came out as a slur.

“Please,” I moaned again, but the voices kept speaking, all being translated by the machine in the same monotone. Arguing over gametes, eggs, and machines.

Finally, a large, thick tube lowered down from the ceiling. The bottom of the tube wrapped around something large and green, smooth like an egg, which protruded from the middle. The sides of the tube, still that metal gray, wrapped around that matte green like greedy lips.

Slowly it came down, and then it pressed itself against my opening. The matte green part was so nice and warm, heated, and I squirmed. My hips moved in hopes of getting the thing deeper, but it only ran the smooth, slightly bumpy head up and down my pussy, squelching as it dragged up and down my slick.

The table I was in suddenly spread my legs wider, forcing my pussy upwards towards that warm thing. The tentacle suddenly pushed against my pussy, this one so much wider than the thing I had been fucked with before. Maybe it would also inflate?

Two more tentacles moved down my chest, both of them sucking at my nipples. I screamed as the pleasure shot through me, my body arching off of the table. It felt so good, the way those machines kept going. And as I screamed my pleasure, the tube pushed itself into my pussy, finally breaking my voice into silence as I came.

This tube didn’t inflate, though I felt full. The suckling on my tits lessened, like being turned down to a lower setting. I felt the tube move back and forth, back and forth, and then it pressed in me, so deeply, almost like it went past my cervix and straight into my womb. I gasped. Tears pricked at my eyes again- the sensations were too much.

But just as suddenly, the tube pulled back, and this time I saw an empty metal mouth, no green. It’d left the egg inside of me. My mouth went slack as I watched a round ball shoot down that tube, suddenly pressing outwards from the opening, just like it had been placed before.

They were putting their eggs in me.

The worst part about the whole thing? I didn’t even struggle. Some new wand or tech, I couldn’t see, pressed down on my womb, down on my stomach, as if making sure the egg was in place. And while that held me down, combined with the restraints on my legs and wrists, the tentacles on my nipples started up again, whirring to life as they sucked harder than before. Again, I arched up as best I could, unable to control my body, unable to control my pussy, as this time the tube went straight for my cervix, pressing against it until it wormed its way inside.

I came again, of course. And again, as the process repeated. Each time the tentacles on my tits whirred to life, my pussy shuddered, so full and used but still so hungry. It wasn’t until the tentacles died down and my restraints were released did I realize it was over. I was still on the table, held in place, but I could move, if I had wanted to. My body still remained with my hips up in the air.

The table moved, then, pulling into pieces where my restraints were, and flipping me over onto my hands and knees. My pussy still in the air, my legs were restrained and my body angled more towards doggy style than the near upside down position of before. It was easier for my belly, too, now hanging instead of crushing my lungs with the enormous weight of the eggs inside it.

And then, a cold finger that ran along the edge of my pussy, perhaps checking to see that I’d taken the eggs completely, that there was no damage.

The walls weren’t translating anymore. Something else entered my pussy- something long and thin, and suddenly a body pressed itself against my ass. One of them- the aliens- fucked himself inside me, his long dick curling and seeking my bruised, deeper entrance. I moaned as he made it inside, and then, he spilled- something cool against the warm eggs inside me, something again and again and again. He shuddered, his hands on my hips, and I knew he was fertilizing them- his eggs, and mine.

Only one had the decency to rub my clit, making my eyes roll to the back of my head, so sloppy and wet and fucked out. It didn’t take much for me to pass out after that, only to wake up on my bed, in my cabin.

Of course, the huge belly of mine protested that it wasn’t all a dream.

I hope you loved reading as much as I loved writing these crazy sex stories?

Why not call me for some personal fantasy roleplay phone sex?