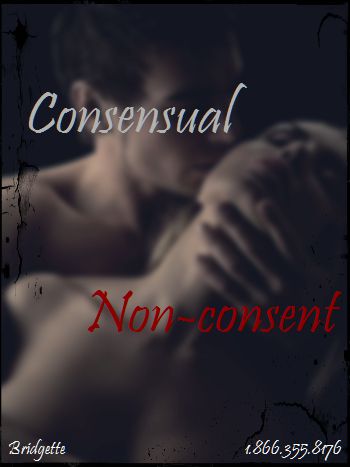 His fingers make their way over my ass, to my crack, kneading and squeezing and stroking the whole time. Then he finds my sphincter and starts to play around the edges. Wait, that’s not where I want his hand; my pussy is weeping for attention, and I don’t let anyone near that virgin territory of my brown star. I find his wrist with my hand, and oh-so-not subtly I push it down to my wet folds, my throbbing clit – oh yes, that’s where I want his fingers, and even though he seems not quite as receptive to that idea as to playing with my ass hole, he seems to have gotten with the program and gives all his attentions to where I want them.

He vamps up his efforts to seduce me; nibbling on all the right spots.

Teasing my most sensitive places; making our way to the bedroom. I’m more then compliant as he makes quick work of my little black dress. With his front pressed against my back, he reaches around and over my arms, caging me in as he grabs the near-nothing lace cups of my demi bra, forcing the material down under the swell of my breasts, in essence trussing them for his viewing and lustful pleasures.

God, he’s rough and forceful with me, but with all the alcohol I’ve had this evening, it feels good to be manhandled like this.  My body agrees emphatically as I feel a fresh gush of my sweet juices spill from my pussy.  He must smell my arousal, because he grabs at my nipples then, harsher than he’s ever been before, pinching and pulling at them; but at the same time he’s nuzzling at the base of my neck and shoulder, kissing and licking, making sure that pain and pleasure meld into one fierce sensation.

I’m in a haze now, everything is almost too much; he shoves me forward onto the bed and I fight off the threat of a major case of the bed spins, turning slightly to look at him over my shoulder. Lord, he looks magnificent, but for a moment I thought I was looking into the eyes of a stranger – something primal, feral in his gaze…I shake it off instantly, blaming the alcohol.  His eyes never leave mine as he disrobes. The hunger burning in his eyes, his need for me there for all to see. For a second a wave of uneasiness washes over me again, but I dismiss it as well, tossing it away with the previous trepidation.

After all, this is consensual … isn’t it?