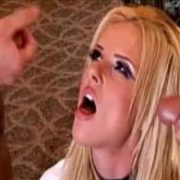 College gang bang is almost a requirement at some schools. If you have never attended college or had a gang bang then you are really not living your best life. I have so many stories from my school days and not one regret. Of course the beginning of my freshman year I was a little nervous. Definitely not as promiscuous as the later years. It took some time to open up.

And still, then I was not at full you only live once status.

Entering my sophomore year I was better educated on this whole college partying situation. With every year I became a little more open and freaky. so my junior year I was ready to do just about anything. And this is where anything came into play. There was hot quarterback named Alex. He and I were at a party together and were started talking and after a few drinks and a few more shots, he suggested that we go to his dorm room to smoke. I was not going to turn down free weed.

The college gang bang started when we were trying to sneak out of the party unnoticed.

That was a fail. All of his jock friends saw us and questioned where we were heading. Informing them that we were going to grab a bg and head back with some smoke for everyone they seemed to be happy with that answer. Arriving back at Alex’s dorm room he grabbed the bag of weed and started to roll one for us to smoke before we head back to the party.

As we puff puff passed Alex leaned over and kissed me.

Well, I’m sure you are well aware that lead to other things. Alex had his hands all over me and I shoved my hand right down the front of his pants, stroking and caressing. Before you knew it my shirt was off and I was dropping his pants. He threw me on the bed and began to kiss me as he took his hard cock and ran it up and down my pussy. Making me nice and wet. I wanted him so bad and now I knew he wanted me to.

He shoved that dick in my pussy so hard and fast that it took my breath away.

As he was pounding the fuck out of my pussy the door opened. We both looked over to see his 5 friends standing there. One of them said, “Well we were wondering what was taking so long, now we know”. Alex told them we weren’t done yet. Even though these guys were telling Alex it wasn’t fair that he got to fuck me and they weren’t getting any, he didn’t miss a pump.

Three words came to my mind when he said that.

College gang bang. I have not done ones of these yet and now would be the perfect opportunity. As I was getting fucked by Alex I looked over and told them that they could all have a turn. They were so excited to be a part of my college gang band that they were all undressed before Alex was finished fucking me. So one after another I got fucked, These guys were throwing me and passing me around like a little rag doll. I was just there for their pleasure.

They fucked me not once but twice each.