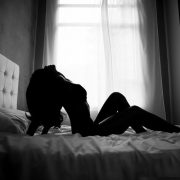 My suite-mate, Kara was a junior, but pretty cool as roommates go. She had pledged the sister sorority to the frat hosting the party. I was only psyched because the frat had the hottest men on campus. We had gone for fresh Brazilian waxes and we were dressed to kill; she, in a clingy black number and I in a white silk halter dress with a draped front and back plunging to just graze the crack of my tight, fine, little ass. That dress has gotten me and my friends past many a velvet rope barring the regular public. It lightly cradled my 36 C’s showing very prominent nipples.

I’m telling you! In the College Boys Cum-Fest dictionary, under the word sexy, is this dress!

We arrived, fashionably late, but just in time to be noticed by all the men gathered outside puffing their Cohibas on the front lawn. We walked the red carpet leading up to the Kappa House where they had arranged photographers. I had to chuckle. We posed for some shots, then made our way into the grand hall where I immediately saw Drew Henderson and some of his closest, fine ass friends. Drew was the king of the campus and was trying to act like he didn’t notice us coming through the doors. I didn’t care who noticed.

I was there with an agenda like I was a drug smuggler. What was that? Simple. To bed as many of these superior fucks as I could before the night was over. I was never sorority material. Not much of a “joiner” I suppose, LOL. I made a bee-line for the central staircase leading up to the chapter president’s room. Uh. That was the king of the campus and one hot fuck, Drew Henderson! I entered the room and dropped my dress – the only piece of clothing I was wearing, to the floor. I left on my 5-inch Louboutins, diamond necklace, matching earrings, a bracelet, and my ever-present platinum belly chain.

The chain disappears in a “V” between my thighs to attach to my clit ring.

Then, climbing the super-high, king-sized mattress, I positioned myself in the center of the bed, striking a pose. I knew I wouldn’t be holding the pose long. Drew watched me ascend the stairs. I felt his eyes the entire way. Within seconds, and exactly as predicted, the footfalls were coming down the hallway, and they were right on time! Then, the doorknob turned, and Drew stood, transfixed at his own bedroom door.

Shock instantly turned to a broad smile on his handsome face. “You are one bold bitch, aren’t you?” He said, with his smile broadening as he spoke. I don’t care for that expression at all, but I bit my fucking lip!

Drew smiled and turned toward the hall where four additional frat boys stood giggling like school-girls.

All chomping at the bit. They had no idea what awaited them beyond the double doors leading to paradise, between my legs. They nearly knocked each other over once Drew stepped inside. All clamoring to remove their pitiful big boy suits.

Moreover, the world they thought they knew was about to tilt on its axis, again. They thought they would take me by force one-at-a-time. I giggled then stopped instantly, telling them I wanted all five of them, AT ONCE! I sucked each cock to near explosion before giving step-by-step instructions on what a gang bang really was.

Not sweet, nice girl sex! Just me telling him how to fill each hole.

I had told them at an earlier party that I’m a heavy drinker! I guess they thought I meant booze. Giggle.  At once, I had one huge cock splitting my tiny asshole, another ramming my pussy, alternating strokes with one another. At the same time, I had one throbbing down my throat until it bulged with fat cock yummy goodness. So, what about the other two? One in each hand, Baby!

Pulling my dress back up my long tanned legs, over my hips and tying it behind my head.

Then, I fluffed my wavy hair, put on fresh lip gloss and looked back at the five men forming a heap at the center of the bed. All, in my wake.

So, will there be more college boys cum-fest fun in my future? Wouldn’t you like to know? Call me for the best in fetish phone sex and if you’re very good, I just may share the rest with you! Who knows? This college boys cum-fest may be just the do-over you’ve always needed in life. Call me NOW!