I Landed Myself Right in the Middle of a Circle Jerking Session! 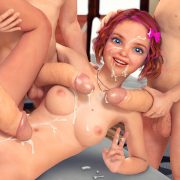 My friends were too insecure to admit that they got caught up in a circle jerking party, but that is exactly what happened.

I had many male friends so a circle jerking scene, or a train at least, was not off the table. Most of my friends were male before leaving for college. This was mostly due to the fact that the girls in school hated me because they knew I could fuck their boyfriends at any given moment if I chose to. A big sausage party was bound to occur sometime. It started at this lame-ass party thing that my friend Adam threw. Most of these “parties” just consisted of smoking pot, and the boys taking turns playing video games and hitting on me. I have never been one for video games, but I do like, and did like a fair amount of attention from boys.

At these parties, I  always received stares like some newly discovered artifact. The only reason I ever went. Receiving stares and compliments from boys were far more fun than sitting at home bored. Towards the end of the night, the boys would all have elevated courage from drinking and smoking. This usually prompted more hitting on me, but often stupider. One always made some sort of spectacle. This time, the suggestion was that we play truth or dare. Truth or dare between one girl and eight boys can go one of two ways. It can end lame as shit where everything is super weird after or it can turn legendary.

Thus giving me a story to hold over their heads and tease them with for the rest of high school.

Especially since not very many of them were sound in their masculinity or comfortable with their sexuality. I agreed to play truth or dare under the pretense that we did not play individually but under gendered teams. So I stood alone, the only singular girl. And the boys stood as a team. When my turn came around to ask, they had to cohesively agree on a group truth that all of them must answer, or a group dare that all of them must do. They thought that that was a silly pretense because they were all drunk and hey, teamwork makes the dream work right? I didn’t start off with truth because I am not a pussy.

So my first dare of the night was, surprise, surprise… take my top off. Which I did with as much grace as possible in a room full of nerdy, desperate, highschool boys. My turn. My dare was that they all drop their trousers and measure their dicks. Although there were protests, peer pressure finished the job for me. Those with larger cocks were eager to have their cocks seen and teased the reluctant boys. I made it clear that those who refused not only admitted that they had tiny cocks but were also total pussies too. So each of them whipped out their cocks and Brandon brought the ruler.

I suggested that they get hard for this experiment as that is the only time that it counts, so they all jerked themselves off fervently, next to each other.

During this circle jerking and measurement process, I noted that Alex had the teeniest cock of them all. Adam too, a tiny little pencil dick. This made so much sense to me because both of them were little bitches. Once the measurement retrievals finished. My dare was up. Truth was obviously no longer an option for me if I wanted to continue the escalation process. My dare was hilarious. They wanted me to lie in the middle of the coffee table naled while they jerked off onto me. I agreed, but not before I set my phone on the couch with my camera activated. I laid back in all of my sexy glory, as every single one of those boys jerked off next to each other.

For fetish phone sex call me! Read more of my blogs to hear about me getting hardcore pimped!