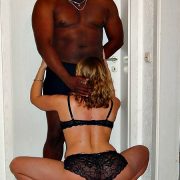 Christmas BBC Fantasy, or what happened when my little brother discovered his “sissy side!”

Christmas BBC Fantasy – I’ve always suspected that my younger brother Wyatt might be a sissy or at least bi, but I’ve never had proof. At least, until now! In any event, I’ve always fantasized about it; remember that brother sister sex story?  Anyway, here’s what happened, in my brother’s own words:

My name is Wyatt. I’m about 5’9″ and lean, with a slim waist and long legs that I keep toned with cycling. Usually, I wear my long, dark blond hair in a man-bun to try to be edgy, or under a hat. I’m 21, but people frequently mistake me for being under 18. Sometimes it feels like puberty has yet to hit, but I receive good compliments on my boyish features. Overall, I’m happy with my slender frame.

I’d worked this stockroom job during the holidays for years. Being a college student, the extra money kept me afloat over winter break. Besides, I had some good friends in the enormous store and so it was great reconnecting with everyone each year.

Even the security guard Kareem and I got along well, despite being almost polar opposites physically. He knew a good worker when he saw one, and we both had a sarcastic sense of humor.

Christmas BBC Fantasy: Kareem was about 6’3″, with dark ebony skin and the imposing physique of a middle-aged football player.

A large belly and muscled shoulders stretched his uniform shirt to bursting, and a thick mustache highlighted a square jaw. He was an imposing sight, certainly enough to deter any would-be shoplifters. Negotiating my way through the packed crowd of shoppers, I wheeled the cart towards the stockroom doors, waving at the big security guard on my way.

Kareem glanced over and raised his eyebrows in greeting.

“Christmas rush, you know how it is.”

The rush of holiday shoppers seemed far away, this deep in the stockroom, and not many coworkers came back here. As I tidied up at the end of my shift, I spotted a store catalog behind a box. Opened to a Christmas-themed lingerie page, a stunning, curvy blonde looked back out of the page at me. She wore a red lace bra and panties, a garter belt, thigh-high red and white striped Christmas stockings, and a cheeky grin. In fact, she looked a LOT like my sister Angel.

Cocking a pose with her hands on her hips while balancing on green platform stiletto heels, the model’s silky golden curls caressed her pert tits. The glossy image caught me off guard, and my mouth fell open. I sat on the box I’d just moved, pulling the catalog closer. As I flicked through the lingerie section like a naughty schoolboy, I felt myself growing very hard.

Glancing around, I realized there was no chance of being spotted this far back in the seemingly deserted stockroom. Grabbing a pair of pink lace panties from a shelf, I turned my attention back to the catalog.

Sitting there on a box with my jeans lowered to my ankles, I wrapped the lacy thong around my shaft. Next, I hesitantly began to stroke myself. In fact, the excitement of doing this in a public place had me rock hard!

As I stared at the flirtatious blonde on the catalog page, I picked up the pace. I’d scarcely begun before exploding into the panties. Fuck, it was intense! Suddenly, a movement from across the room caught my eye. Instantly, my post-orgasmic haze was shattered. Standing there at the end of the aisle, Kareem pointed his camera phone straight at me!

The big black security guard snickered at me. “I always wondered what you kids must get up to back here. Guess now I know.”

“Kareem, I’m sorry… This is the first time, I swear. I thought I was alone. I was just…”

Giving me an amused look that hinted at something darker, he laughed as he replied. “You certainly thought you were. Perverted little slacker. Jacking off on company time, eh? What are we going to do about that?”

“Kareem, please I’m sorry. Don’t show that to the manager, he’ll fire me!” I begged.

I tried to move past him, but he blocked my exit. Glaring down at me, he commanded me to see him tomorrow after my shift. Staring up at him, I stuttered “Y-yes sir!” Stepping aside, he allowed me to leave.

My face flooded with shame, I stuffed the cum-soaked panties into a pocket as I fled the deserted store.

As if in a dream, the next shift dragged by. The reality of my situation hit me in mid-afternoon, and I dreaded seeing Kareem. I managed to avoid him until the store closed and the main lights were switched off. Dragging my feet, I made my way up to his office. Before I’d even knocked on his door, my face was red with embarrassment.

“Come in,” he rumbled in a baritone. Entering hesitantly, I closed the door behind me.

“It’s about time you got here,” Kareem growled.

Black eyes gleaming, Kareem sat behind his large desk. A box sat in front of him. Trying not to show how nervous I was, I waited for him to speak.

“You should be able to keep your job,” he began.

Stifling a sigh of relief, I started to thank him, but he continued. “We’ll deal with your punishment off the books. It’ll be best if we keep this just between the two of us.”  Kareem rose to his feet, then stepped around to my side of the desk.

“Young men like yourselves need a bit of guidance, so I’m here to give you that. Open the package,” ordered Kareem.

Obeying him but taking my time, I tentatively tore open the parcel. After that, a matching red lace bra and panty set fell into my along with a pair of striped stockings.

“Put them on,” ordered Kareem.

As I stared at him in shock, the situation seemed almost surreal. Although I knew I was in trouble, this conversation was not going the way I thought it would. As I backed away, the formidable black male smiled an unsettling grin.

“T-this job isn’t worth that much to me, Sir. I mean, Kareem. I won’t dress up for you,” I bravely proclaimed.

Leaning over the desk, Kareem grinned wickedly as he twisted the monitor around to show me the hi-def video playing on the screen. “You’ve got more to lose than just a job, boy.” I stared at the images playing out before me. My eyes were closed, but it was obviously me. First of all, you could see the exact moment I began to orgasm, my toes curling with delight. Furthermore, you could see exactly when that expression turned to panic as I spotted Kareem recording me.

“How’d you like your parents to see this? Or perhaps one of your sisters? After all, I’ve met your sister Angel, and she’d never let you live this Christmas BBC fantasy down,” Kareem smirked, his expression turning stern.

“Now, I’m going to tell you this just once. Take off your clothes, then fold them neatly. Next, put on the pretty lingerie. If you refuse, I’ll send this video to your family. Moreover, I’ll plaster it all over your friends’ social media.”

Despite realizing that he’d won, I stupidly retorted with as much eloquence as I could muster. “Fuck off, dude. I’m not doing it,” I managed to squeak.

Moving with a speed that belied a man of his age, Kareem swiftly grabbed me, pinning me to the wall. I choked and squirmed, but he easily kept me in place with just one hand. Meanwhile, he tugged down my pants until they bunched around my ankles.

Not even out of breath, Kareem calmly stated, “Bad girls get punished.” Although I struggled, I might as well have been trying to move a mountain. After dragging me over to a chair, he sat down. As he pulled me across his lap, my bare ass felt very exposed. Consequently, I was completely vulnerable! At first, I fought to get free, but he stopped me with a hard swat. Stunned, all I could do was groan.

“Now, raise that ass for me…sissy.”

What happened next in this Christmas BBC fantasy? Indeed, watch for the “upcumming” Part 2. Even better, get it straight from my lips to your ears. How, you might ask?