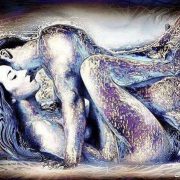 Yes, Blue is a cheating wife and her current husband was on stage. But she had needs that he ignores. And Ronnie was a lover from years ago that had recently moved back in town. LOL she never could resist his monster cock. So when he pulled her aside at the Christmas Party a few weeks ago she started the affair with no hesitation. Just as now when…

He turned to her, and they kissed softly.  Putting his arm on her shoulder, and she rolled slowly on her back.  He could taste the liquor from her drink as he probed around her mouth with his tongue.  She pulled him closer, pressing her body against his.  The night wind was cool (though not too cold), and their legs intertwined, seeking mutual warmth. The music stopped, and the crowd cheered as Ronnie moved his hand to Blue’s breast.  George’s band began another song.

She was firm and round under his touch, and he could feel her nipple erecting through the fabric.  He reached around, and Blue rolled over a bit to let him at the zipper on her dress.  He pulled it down, then reached inside to unsnap her bra.

She let him pull down one strap from her shoulder as he sought her breasts, kissing him harder.  He took the warm flesh in his hand, not quite a handful but well-shaped.  He tweaked the nipple a few times, rolling it between thumb and forefinger.

Blue’s hands sought his butt, squeezing and pinching. One hand slipped between them and found his zipper.  It snaked in through his fly and was soon gently caressing his erection.

“How much time?” she gasped.

He lifted his head just long enough to check his watch. “Four minutes.” She pushed him away, rolling him on his back, and sat up beside him. She dug his cock out of his pants and bent to take him in her mouth. He gasped as she bottomed out, sucking hard, then withdrew, bobbing slowly.  His hand groped at her thighs, and she spread herself open a little as he reached under her dress.  He found the tops of stockings and probed further as she licked and sucked his erection.

She had no panties on, and she giggled around his cock as he found her crinkly nest of pubic hair.

Then she swallowed him up again, shivering as he found her clitoris, slick with her fluids.  He stroked it gently, slipping a thumb between her lips. She bobbed faster on him, sucking so hard that he began to ache.

David’s band finished his next song, and they could hear the crowd cheering the impending stroke of midnight.  Someone took the mike from David and began revving them up further.  Blue sat up.

She threw her leg over his waist, hiking her dress up over her hips. He groped at her as she took his erection in her hand, bending it backward as she sank down.

“Oh, shit,” she moaned. The vibrations of the compressor shivered through both of them, and Blue bent all the way down.  She kissed him vigorously as he pushed up into her.  Her hips began to roll against him.

“Midnight,” she gasped, “I want to come at midnight, okay?”

He nodded rapidly, pulling his head up to seek her breasts.  She pulled the other strap down and pressed her nipples against his mouth. He sucked on them hard, biting every so lightly, and Blue groaned, grinding herself against the base of his cock.

The cheering crowd grew louder and louder.  Ronnie strained through the fog of his arousal to hear what they were saying. They had begun the countdown: ” . . . fifty-six . . . fifty-five . . . fifty-four . . .”

Blue rode him faster, hands digging at his shoulders like claws.  He began to doubt his ability to hold out long enough and groped at her to slow down.  She laughed huskily and tried to comply.  He pulled her down and they kissed roughly for a few seconds, crushing their mouths together.

Blue began to move again, more slowly this time.  Ronnie pushed her back to resume sucking her breasts.  He groped at her buttocks, squeezing them, feeling tense and relax and tense again as she rode his cock. ” . . . thirty-six . . . thirty-five . . . thirty-four . . .”

She began to squeeze him inside her, gripping and releasing rhythmically.  She felt like a slick glove around him.  His semen began rising in him again, aching at the base of his cock like molten lead. One of her back-garter straps popped loose under his fingers. Blue whimpered softly, pushing him away from her breasts. He lay flat, still holding her butt as she humped against him.

“. . . twenty-two . . . twenty-one . . . twenty . . . nineteen . . .” The cheers grew louder.  The M.C. was howling various banal exhortations about the end of the year.  Ronnie was suddenly distracted at that.  It was enough to restrain his impending climax for a few more seconds.

Blue cried out, bouncing eagerly on his cock, hands gone to claws on his shoulders.  He matched her thrust for thrust, trying to guide the movements of her butt.  The other garter strap gave way a moment later. “. . . ten . . . nine . . . eight . . . seven . . .” She convulsed, pounding herself down at him.  It was too late for either of them to stop now.

Ronnie grunted, humping up at her as if she were riding a carnival attraction. ” . . . three… two . . . one . . . Happy New Year!” Blue let out a shriek as the fireworks went off behind them, shuddering with the vibrations of the compressor.  Ronnie stabbed up at her with everything he had, coming so hard it almost hurt.  They shook and quivered together, Blue falling forward on to his chest, as the crowd cheered and howled and began singing “Auld Lang Syne.”

“Happy New Year. I am going to go join my hubby on stage now”

Ronnie could not help thinking how sexy it was knowing that she was marked a cheating wife. And that he would see her