Cheating On My Boyfriend With His Dad

I had started dating this hot young guy from a wealthy family, he was going to be a lawyer like his dad. After a couple of months he wanted me to have dinner at his parents house to introduce me to them and I wanted to make a good impression, so really got dressed up nicely. Well his mom had been called out of town unexpectedly that day for a family situation and so it was just going to be me and my boyfriend and his father.

As soon as we were ushered in, I could feel his father staring at me with a lustful gaze in his eyes, staring at my cleavage. Normally I’d be put off by the leers of an older man, but my boyfriend had clearly inherited his good looks from his father and I found him very appealing and started to flirt with him. As we were eating dinner I felt a hand on my thigh and assumed it was my boyfriend, until I quickly noticed I could see both of his hands, meaning it wasn’t his hand. I felt this hand under the table push my skirt up and caress the inside of my leg and I didn’t stop him or pull away and I kind of felt like a slut for allowing it to go on. 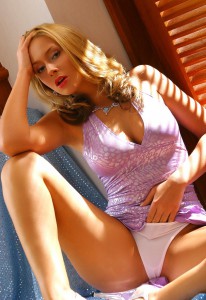 After dinner, my boyfriend settled down in front of the t.v. and his dad asked me if I’d like a tour of the house and my boyfriend said to have fun looking around, engrossed in his sports game on t.v. I went along. We we upstairs in the master bedroom when I was pressed against the wall and felt his father’s hardened cock pressing against my stomach as he passionately kissed me, his tongue all of a sudden down my throat and his one hand on my breast and the other up my dress. He caressed my nipple until it was hard, and he teased my pussy lips through the fabric of my panties making me dripping wet before I even felt skin against skin contact of my cunt and his fingers.

He slid his finger into my panties and was rubbing my clit and I was dripping wet and I looked towards the hallway and was worried my boyfriend might happen along at any moment, but he whispered in my ear as long as that game was on, he’d lose all track of time. I kissed him back and reached my hand into his pants and started pumping his cock up and down and he came on my hand as he rubbed my cunt. My swollen clit was so stiff as he went back and forth over it and I was soon bucking my hips against his hand and he soon made me cum. I had to bite my lip to be quiet so we wouldn’t be discovered. My God, I couldn’t believe I was cheating on my boyfriend, and with his own father less than 50 feet away. I can’t let this happen again…