Caught Having Sex! We Thought We Were Going To Be Safe Behind A Locked Door* 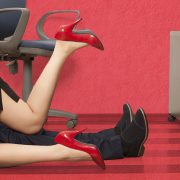 Caught having sex, Has this ever happened to you?

Caught having sex, as Clare Booth Luce once said, no good deed goes unpunished. This is true in my situation also. Can I see a show of hands? How many guys would like to have their woman show up at their work wearing only a trench coat? I’m sure a lot of you gentleman raised your hands.

So I did this to Michael last week.

I knew he would be working alone. Shawn was out of town for work and his GM Wendy was in a very important meeting and will be in the other end of the building. I called him and told him that I was there and to meet me at the door. The look on his face told me that he knew there was nothing under my coat. Grabbing my hand he led me into Wendy’s office. I was a little confused so he explained that if the drivers were to come to look for him they would look in his office. Wendy would be on the other side of the building all day so there would be no need for anyone to come over her.

Ok, I will fuck him on his bosses desk.

Well, this is where our plan backfired and we got caught having sex. Kissing me and caressing my body with his hands he lifted me and placed my naked ass on Wendy’s desk. Grabbing him by the waistband I undid his belt and pants. As they hit the ground I wrapped my legs around his waist and pulled him closer to me. Leaning back and pulling him down with me I push his heat down to my titties. Grabbing them and sucking on them as he slowly inserts his hard cock into my pussy.

Not a care in the world at this time until I heard the door creak open.

We were going to get caught having sex on his bosses desk. But by who I didn’t care I just wanted to keep fucking. I began to moan louder to try and cover the sound of the door opening Hoping that when we were caught having sex they would quietly turn around and walk out the door. The problem is we were caught having sex by Wendy herself, Michael jumped up the minute he heard her. My heart was racing hoping she wouldn’t tell him that she and I had a couple of sexual experiences before.

Wendy is a shemale and broke my shemale virginity about a year ago.

Now that we were caught having sex she told us to keep going and finish what we started. Michael continued to pound my pussy as Wendy lifted her dress and started stroking her cock. It was nice and hard as she guided it towards my mouth and begged me to suck on it again.

The look on Michaels’ face was priceless as I deep throated her huge cock.

That is the moment that I noticed the camera in the corner of her office. We were caught having sex but she didn’t seem to mind, now I wonder if he will be checking that camera when she isn’t here. She might just become a peeping Jane addict. Call me on my phone sex kingdom number and I will tell you what happened after getting caught having sex.

One Reply to “Caught Having Sex! We Thought We Were Going To Be Safe Behind A Locked Door*”