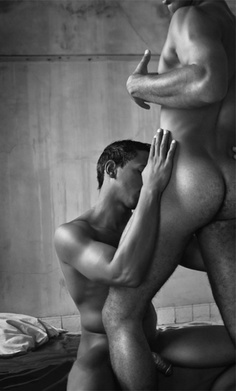 He sits down at the bar and starts telling me about this guy that he is supposed to meet, and it is starting to sound a little off.  Apparently he posted as a girl, looking for a guy into forced-bi, and wouldn’t you know it, he used my pic.  He showed me a pic of the guy who was supposed to be meeting him.  Good looking, downtown attorney, married.  I could tell this was going to be my type of party.  And lucky for Jason, it was 30 degrees this morning, so there wasn’t much going on at the bar.

In walks his *date* and he immediately sees me sitting at the bar with Jason.

He walks right over to me and introduces himself as Jake.  Jake takes a seat next to me and seems a little nervous.  He says this is his first time, and he is on his lunch break, so he will need to hurry this up before he loses his courage.

Jason sneaks in, and as soon as he sees Jake’s hard cock, he immediately Jason whips his out and starts jerking it too.  Within moments, Jason is panting and moaning and Jake opens his eyes.  He looks over and sees Jason’s hard cock and he freezes.  “What the”? He asks in my direction.  I tell him not to worry, but to get down on his knees and close his eyes.  Like a good first timer, he does what he is told.

I grab Jason by the dick and pull him over to Jake’s mouth, rubbing his leaking cock onto Jake’s trembling lips.  I press Jason’s hard cock in between Jake’s lips and push him into his mouth.  Jake is still stroking his own cock, hard and fast as he sucks and slurps for me.