Candy from Strangers; a Cautionary Tale on Halloween for Guys ♕ 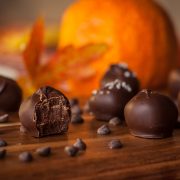 Candy from strangers is a no-no.

Candy from strangers and the taking thereof is the first golden rule you learn, but that goes out the window on Halloween.  Kids are lucky, though.  They have adults who trick or treat with them and inspect what they get.  As nice as the offer was for homemade candies, most adults didn’t go for it for obvious reasons.  Unfortunately, Joseph didn’t get the memo about taking strange candy from strangers.

He was not going to go out at all that night but owed his uncle a solid, so he took his younger cousin, I mean spiderman, out trick or treating for the evening.  At first, everything was going as normal.  Spiderman was getting all sorts of awesome candies, prepackaged and without any mysterious injection sites.  That is until they reached a strange house that looked entirely out of place.  It looked haunted and crooked, too, and everything seemed to get a little darker the closer they got to the door.

A plate of chocolate salty balls

Joseph thought it was a joke when he saw them; someone trying to be funny thanks to an old South Park joke. Though, if it was just a joke, the homeowner sure did go the whole nine yards.  These things looked amazing.  He could see flecks of nougat in the milk chocolate crust and white chocolate shavings on some of them, too.  White chocolate just so happened to be Joseph’s favorite, and he was dying to know if the center was solid or filled with a delicious, melted center.

He went for it

The warning came too late.  He’d already popped one in his mouth.  Immediately, the flavors were like an explosion in his mouth.  They were creeping into his brain.  So much so that when his cousin decided to try one himself, Joseph denied him.  Instead, he grabbed the plate and shoveled the rest into his greedy gob.  He’d always been a fiend for chocolate, but he hadn’t imagined being this hard up for these treats.  Speaking of hard.

As he was licking the plate clean, the front door of the creepy house was creaking open to reveal yet another plate of chocolate salty balls.

“Cousin Joey, we’re definitely not supposed to inside stranger’s houses!”

Again, the words fell on deaf ears as Joseph only had one thing on his mind.  Big, hot, chocolate balls.  As he got to his knees and began to scarf them down, his cousin noticed something.  His ass was getting fatter with each passing second, and his lips plumper.  Also, he was talking about his body.

“Hot.  So hot!”  He said as he stripped, confirming that his body had completely changed.  Almost anyway.  He had the body of a flat-chested woman, and his cock, which he’d personally been so proud of being nearly 8 inches, shrank and hardened into a puny 2 and a half.  “Balls.  Need more balls.”

“I’ve got your balls right here,” said an ominous voice from deeper within.

Joseph crawled in further, completely forgetting his cousin.  The door slammed shut just as his cousin ran inside to try and stop him.  Then the lights came on, revealing their hosts.  It was every manner of beast and monster of the night… except they were black.  They saw Blackula, Werewolf Jones, Frankenbrown Junior, The Creature from the Compton lagoon, and so many more.  Most importantly, he saw their big fat cocks and succulent balls hanging out just for him as a brain-fucking zombie passed a wad of cash to a very voluptuous witch.

Joseph was definitely the real party favor that night.

The moral of the story is that if you go out trick or treat during a quarantine, ass and mouth rape is inevitable.  So I hope you stayed in and jerked off with me instead!  Give my phone sex line a call.  Happy Halloween!